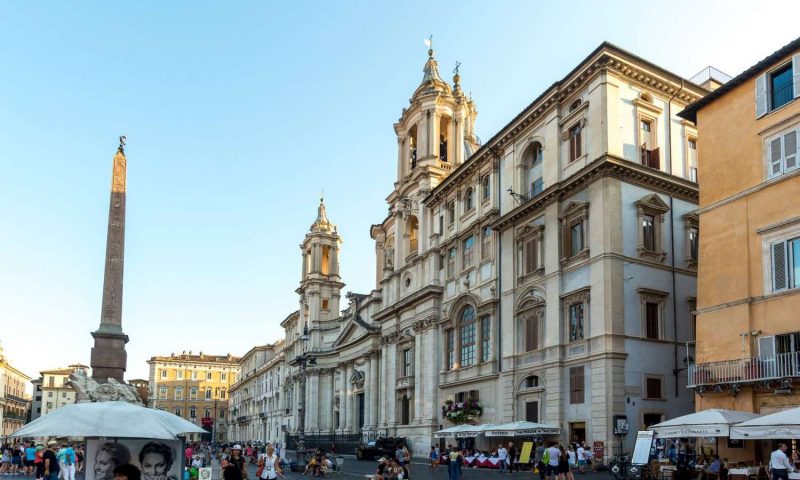 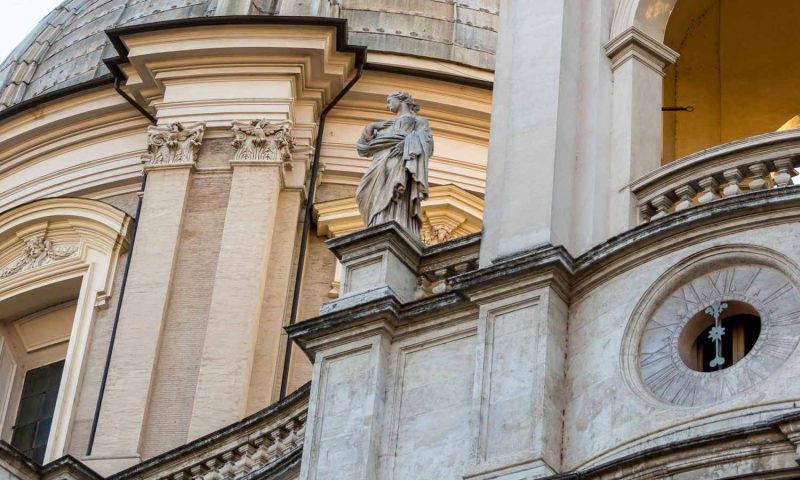 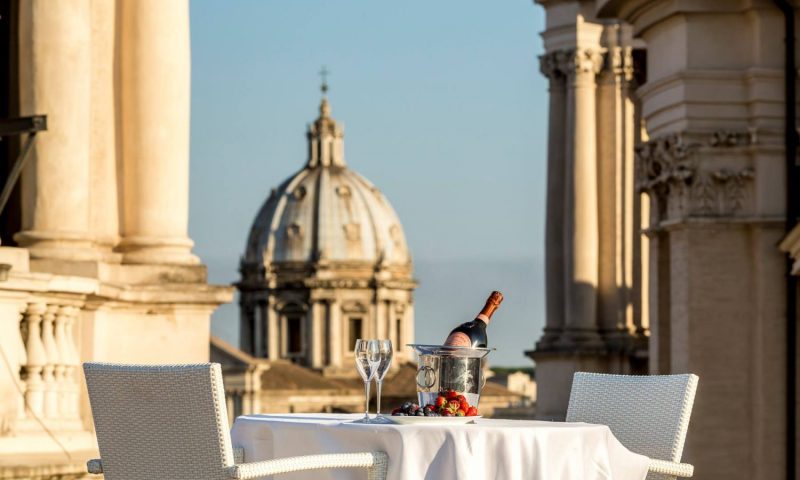 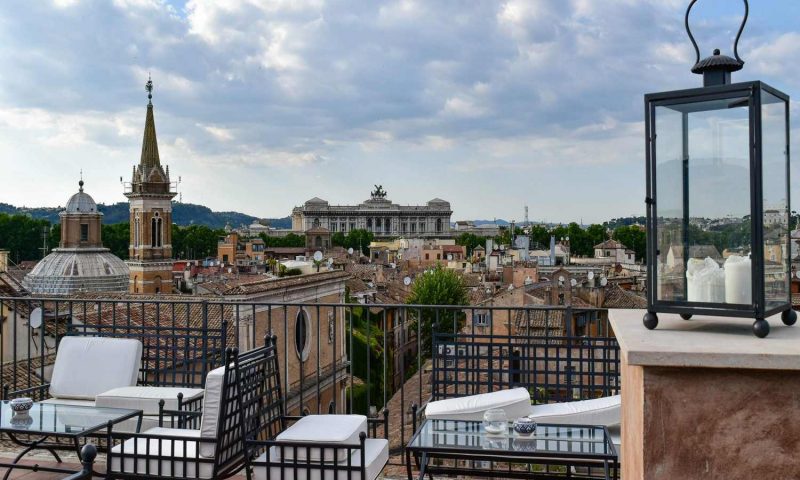 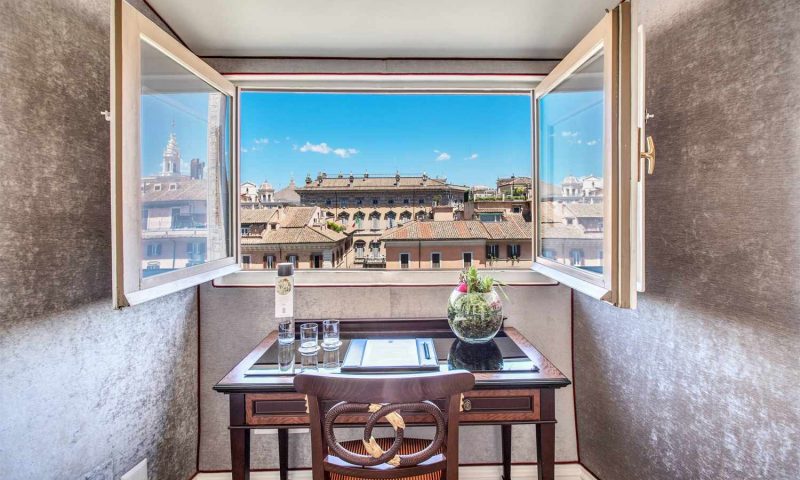 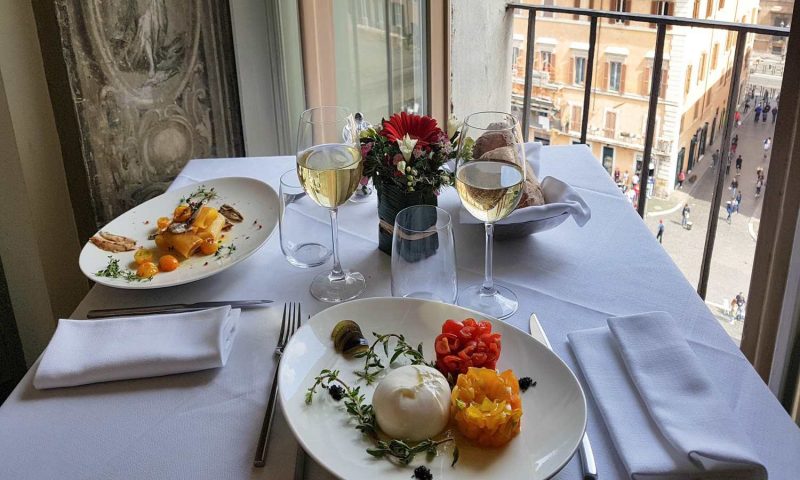 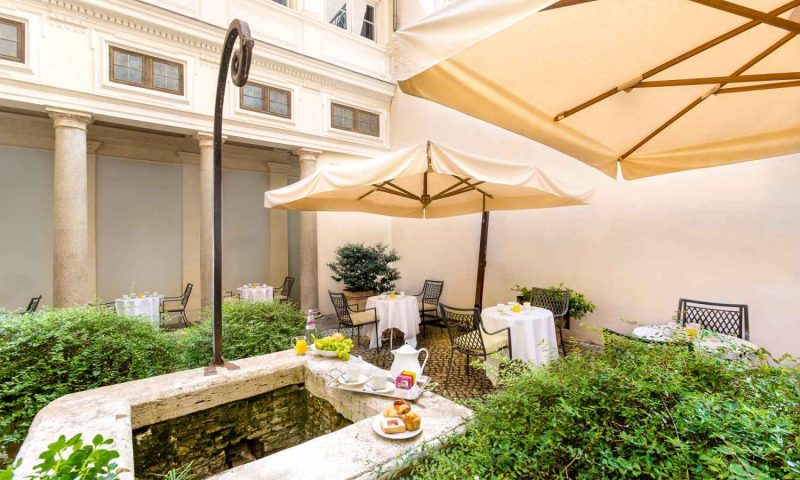 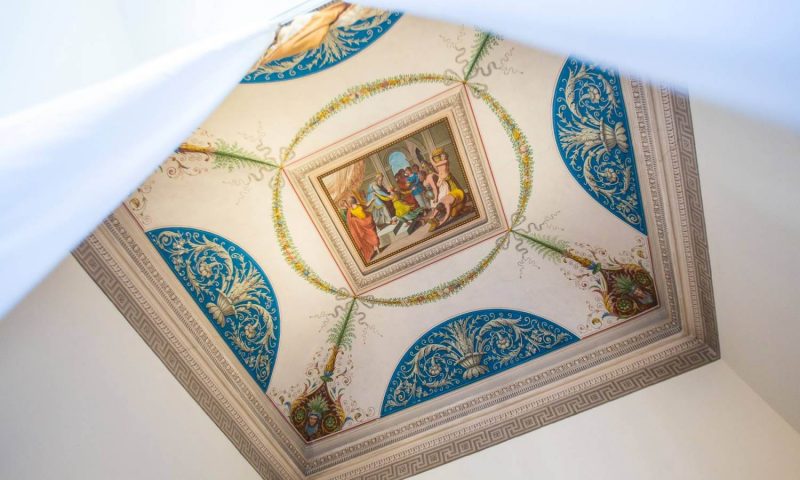 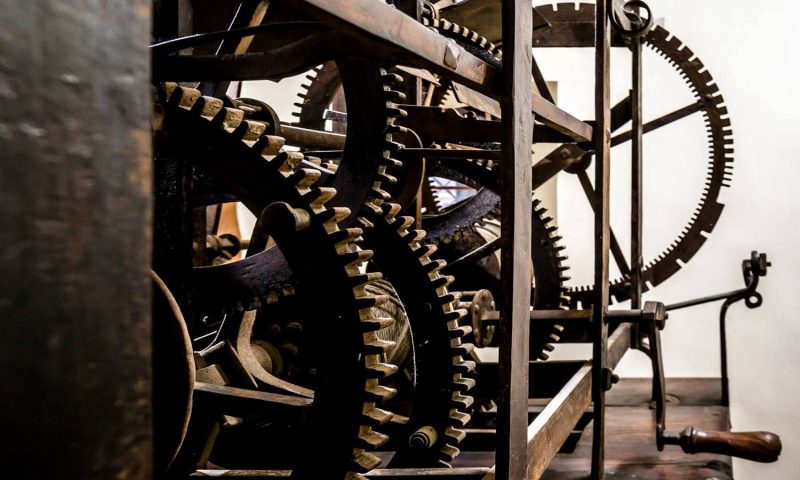 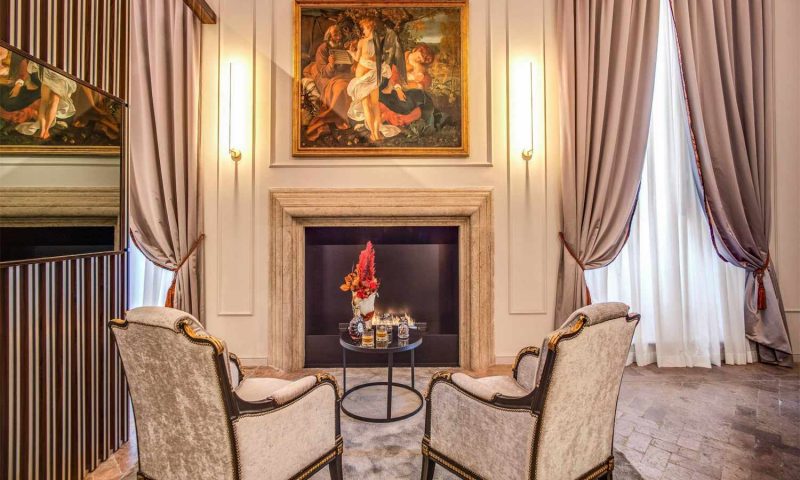 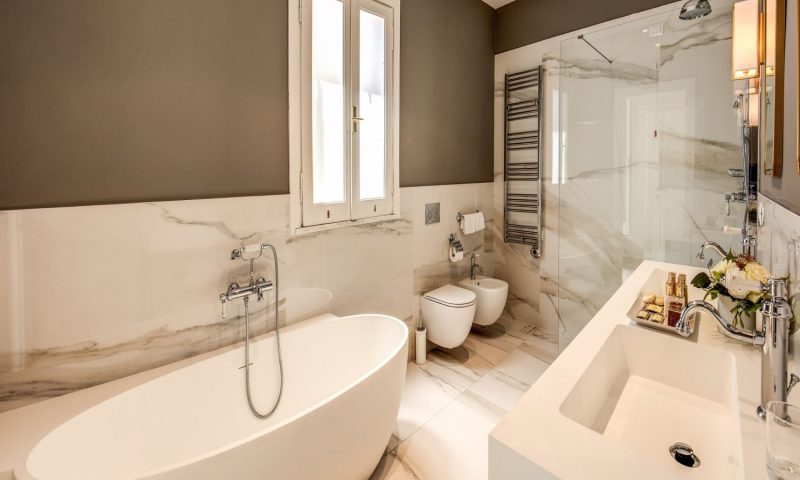 Rooms and suites in a 17th century palace designed by Borromini. Guests of the Palace can literally ‘living history’ and have breakfast in front of the Fountain of the Four Rivers by Bernini, sip a drink at the sound of the bells in the church tower of Santa Agnese, sleep under the frescoes, look out on Piazza Navona from the old clock round window and dine on the roofs of Rome with a breathtaking view that sweeps from the dome of the Pantheon to St. Peter.

The ‘Collegio Innocenziano’ is the name of the wing of Palazzo Pamphili that houses Hotel Eitch Borromini. Our suites are a rare opportunity to sleep in a historic mansion dating from the seventeenth century, in one of the most beautiful squares of Rome and the world.

THE HISTORY
The 17th century Collegio, the building which houses Eitch has important archeological relevance and is part of a rich historic context.

The entire area, overlooking Piazza Navona, was occupied during the Roman era by Emperor Domitian’s stadium erected in 86 AD: an impressive elliptic building in travertine that for almost four centuries hosted athletic games.

After the V century, the stadium went gradually in ruin, but its arena, known as Campus Agonis (Games Field), continued to host rides, fairs and shows.

The presence of the stadium in the following centuries determined the morphology of the area which over time saw the erection, from the XV cent onwards, of elegant buildings of distinguished Roman families.

In the first half of the XVII cent, the series of buildings that delimited the piazza were enhanced with prestigious architectural elements, among which the buildings of the Pamphilj family.

The characteristics of the building
The project was assigned to Francesco Borromini, a genius where Baroque architecture is concerned and highly respected by pope Innocent X, who wanted him as part of his entourage.

Borromini began work in 1654, designing a square-based structure which stretched out from via di Santa Maria dell’Anima to via di Sant’Agnese in Agone, overlooking Piazza Navona and characterized by a strong verticalism.

The current building of the Hotel Eitch Borromini is six floors high, along the northwest side of the sacristy of the Sant’Agnese in Agone church and has a magnificent and evocative roof terrace, which offers the visitor one of the most beautiful views of Rome.

At first the College was located on the last floor of the palace, then it moved to the main floor only to then move to other areas of the building, leaving room for the Pamphilj private library, famous for the quantity and rarity of its books and manuscripts, as well as for the frescoed vault ceiling by Francesco Cozza.

The College had three entrances with three staircases, including the original spiral staircase designed by Borromini, still in use today.

The main facade, identical to the one of Palazzo Pamphili, overlooks Piazza Navona and is characterized by an elegant Serliana window (triple lancet window) which resembles the one in the internal courtyard.

Innocent X died in 1655, without having seen the completion of Borromini’s work, which terminated around 1658, thanks to his nephew Camillo Pamphilj, son of Olimpia Maidalchini, who according to legend, was the real promoter of the College and who ordered the construction of secret passages and hideaways within the building, still visitable today, to use for her meetings with the pope.

The construction of the Collegio Innocenziano thus contributed to turning Piazza Navona into the so-called “Isola dei Pamphilj”, the Island of the Pamphiljs, a great testimony of the Baroque architecture and of the family’s power.

Pope Innocenzo X and the Pamphili family
It was Pope Innocent X Pamphilj who, upon election in 1644, gave the piazza its current scenic layout, which was to become the worthy location of the family’s residence, thus showing the family’s greatness.

The project included the renovation of the entire piazza, with specific attention to the enlargement of the palace and the private chapel, Sant’Agnese in Agone church. The construction took place at the same time as the construction of the church, on the site already occupied by Giulio Ornato’s palace.

The purpose of the ‘Collegio Innocenziano’ was to offer the young members of the Pamphilj family, the opportunity of priestly training and a cultural education.

The more deserving students were admitted at the age of seven and, once adults, could then choose o continue their ecclesiastic career in Rome. The building served to increase Innocent X’s power, who was thus able to include among his achievements providing education.

SUITE LUXURY (PAMPHILJ)
An apartment with all the creature comforts. Suite 201, named “Pamphilj” after the family who commissioned Algardi and Borromini to design the building, is in what was once the ancient chapel when the building housed a convent.

There is a huge 17th century fireplace in the living area, which has a high, frescoed ceiling. The hallway, walk-in closet and master bedroom are extremely spacious, and the bedroom also has a fireplace and an incredible view of the fountains in Piazza Navona.

The marble bathroom has a double sink, a bath and a circular emotional shower, which is set in the space that used to house the spiral staircase leading to the Pamphilj family’s library, which left us numerous testimonies and artistic masterpieces which are now on display around the Hotel Eitch Borromini.

The furnishings have been meticulously chosen, from the toilet to the desks, the large table in the living room, and the screen with a smart-TV inside that divides the living room into two areas.

Finally, there is a small library and a wine cooler for fine wines, which you can sit back and enjoy in the armchairs in front of the crackling fire.

During the Roman Baroque period, Palazzo Pamphilj was one of the most important noble residences in Rome, and just like the illustrious guests who stayed here before you, you will feel quite at home.

DELUXE SUITE WITH VIEW
Superbly furnished suites with all the characteristics of the category that precedes them but enhanced by the view of one or more corners of the eternal city.

In the rooms, all exceptionally large, there are portions of the original furnishings and original coffered ceilings overlooking the important monuments of the city or the square below. Each Suite therefore offers a personal and different perspective on the Eternal City.

Suite 303, called Navona, overlooks Palazzo Madama, one of the historic buildings in Rome, now seat of the Senate of the Republic.

The building was built in the 15th century by the Medici family and its name comes from the Duchess Margherita D’Austria, known as “Madama”, who established her residence there for a long time.

All the windows of the room have a superlative view on the fountains and the square below and sitting on the desk in front of so much beauty, it is easy to understand why the family had decided to build the residence right here and turn the place into the “Island of the Pamphilj”, a great testimony of Baroque architecture and the power of the family.

Suite 403 sees the monumental complex of the Vittoriano in Piazza Venezia, part of the magnificent dome of Sant’Agnese in Agone and, above all, a glimpse of the extravagant white spiral dome that architect Borromini – the same who designed the Eitch palace – raised in 1640, struck by lightning 4 times in 32 years.

The ceiling of room 501 is asymmetrical and made of wooden beams, because we are in correspondence with the roof of Palazzo Pamphilj. The peculiarity of the suite – for which it resumes its name – is that it has an exclusive view to the north towards the Palace of Justice (commonly called by the Romans “palazzaccio”).

Made in white travertine by the Perugian architect Guglielmo Calderini at the end of the 19th century, it is one of the major works created after the proclamation of Rome as the capital of the Kingdom of Italy.

The view that can be enjoyed at sunset over the roofs of Rome is unsurpassed, the height of the Eitch palace allows dominating all the surrounding terraces.

CLASSIC ROOM
Large and bright double room equipped with an extra-comfort bed and furnished with an attention to detail. The original flooring makes the environment suggestive and in keeping with the building’s century-old history.

Perfect and convenient accommodation for couples and business travellers who need more comfort. The room has a private bathroom with shower, hairdryer, and courtesy kit.

The view is onto Via Santa Maria dell’Anima that takes its name from the church built here in the fifteenth century and it was formerly known as “via dei Millini”, due to the presence of this family in the complex known as Tor Millina.

The ancient medieval tower with corbels and Guelph merlons, survived over time and renovated, is visible from some areas of the building that houses us and looking up, right in front of the Eitch Reception.

TERRAZZA BORROMINI
On the 4th floor, alongside the Art gallery is located Terrazza Borromini, available for our guests. The restaurant offers an intriguing menu inspired by the classic Roman tradition, which makes use of the finest ingredients from all Italian regions.

The restaurant develops in the halls overlooking the square, embellished by Bernini’s frescoes, which frame one of the most valuable prospects of the famous fountains.

In the summer months, the service is extended to the splendid terrace set between the bell tower – that sounds every day at 12am – and the magnificent dome of Santa Agnese church. Open daily for lunch and dinner, from 12am to 3pm and 7pm-11pm. Custom menus available as well as private rooms for business meetings.

LA GRANDE BELLEZZA ROOFTOP
The elegant rooftop of Hotel Eitch Borromini, nicknamed by our most affluent customers: “La Grande Bellezza”, is available for refined aperitifs and private events on the sixth floor. An intimate bar with a few set of sofas in a grand setting: the rooftops of Rome at 360 degrees.

This roof is a hidden jewel, closed to the public until a few months ago, and sunset is able to take the breath away even for those who live and work in the eternal city ever since. Every day, from 6.30 pm – only with reservation enjoy delicious high-quality aperitifs and small gourmet tastes.

WEDDINGS
Having a XVIIth century building at your disposal, until now reserved for the lucky few, is no longer a dream. Eitch Borromini, with its centuries of history woven into the fates of Rome is the ideal location to organize exclusive events.

Located in one of the most beautiful squares in the world, with an unparalleled view, frescoes and furnishings filled with history, this venue will leave your guests breathless.

Available for any occasion, the rooms for private events and business meetings, together with the dining rooms overlooking the Bernini fountains, the ancient cloister with the central well are available for presentations and appetizers, while the two terraces with stunning views of the city are ideal for luncheons and receptions. These elegant and well lit spaces can accommodate up to 80 people.

EVENTS & BUSINESS
Available on request rooms for business luncheons and private meetings. All the rooms are very elegant and can accommodate up to 80 people. We can provide the following services: 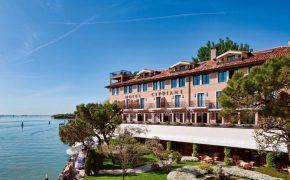 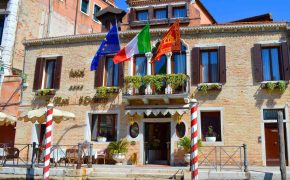 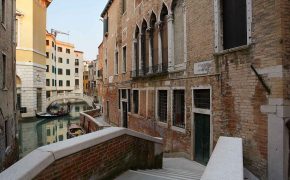