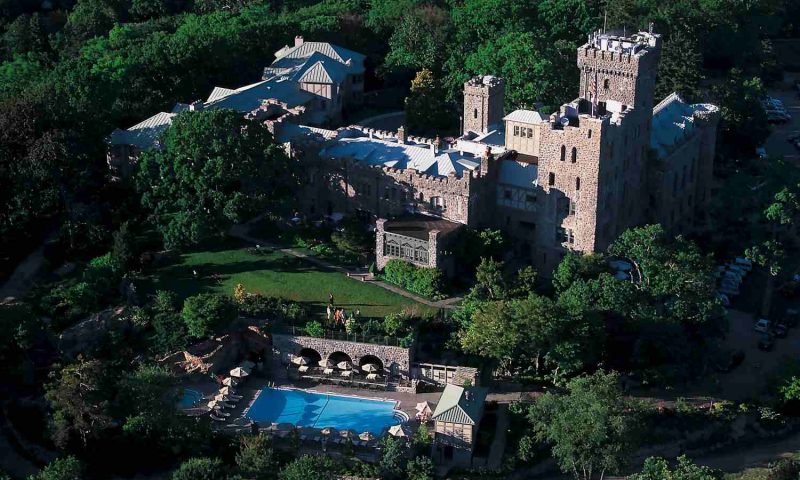 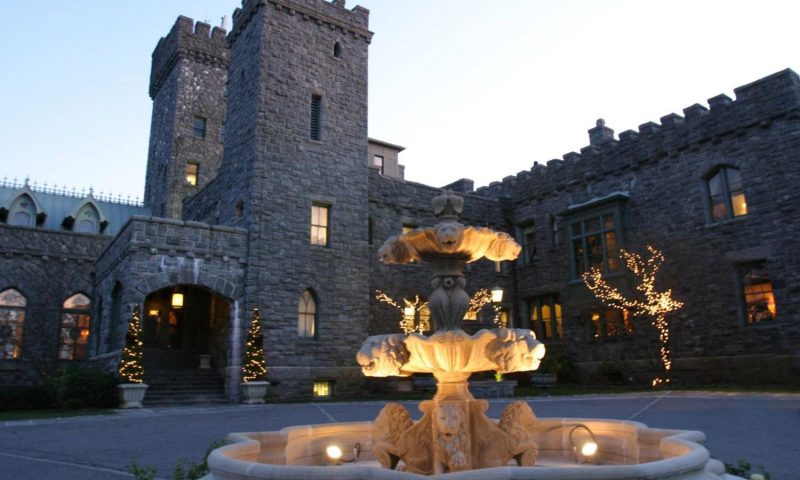 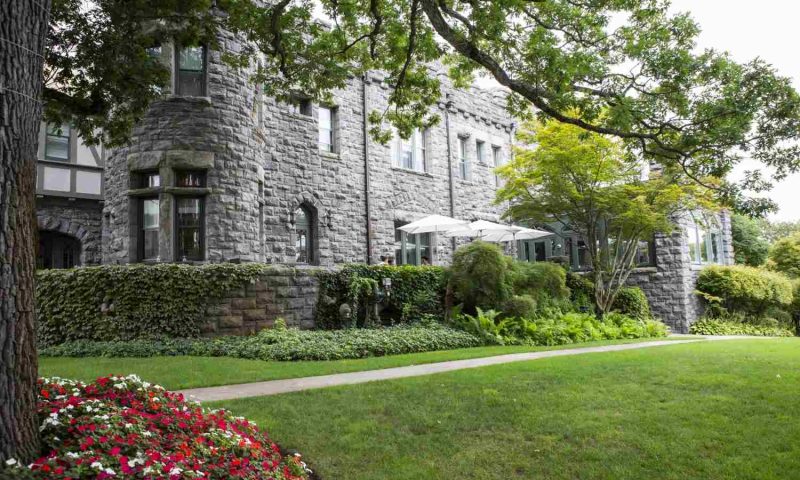 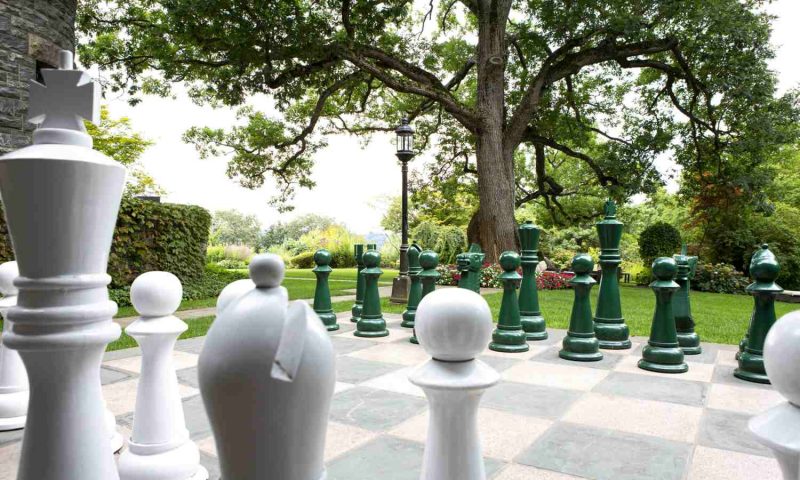 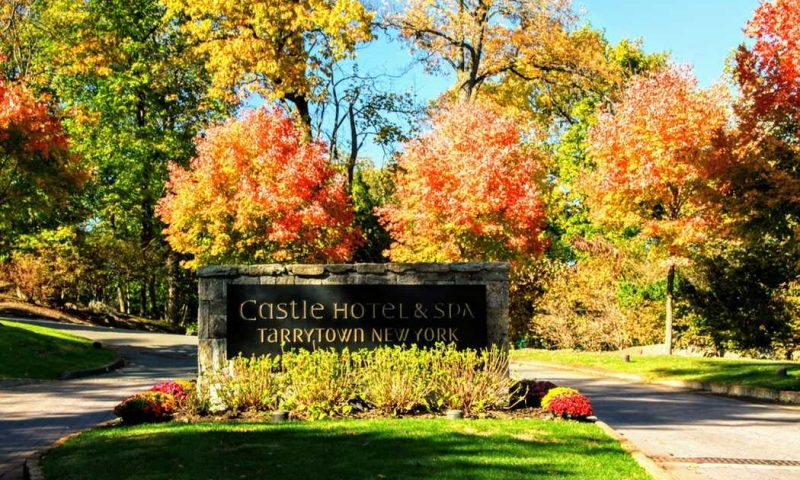 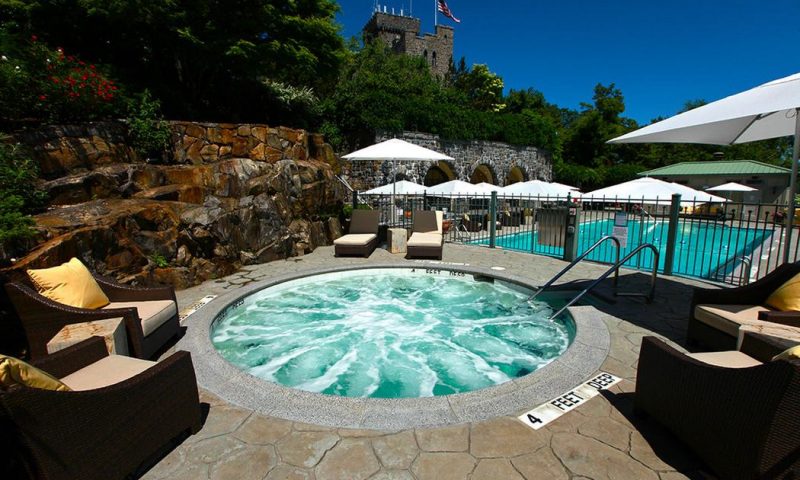 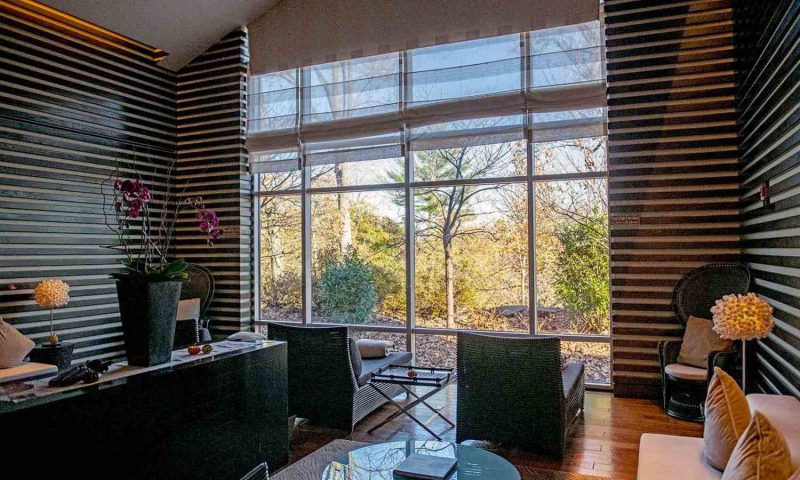 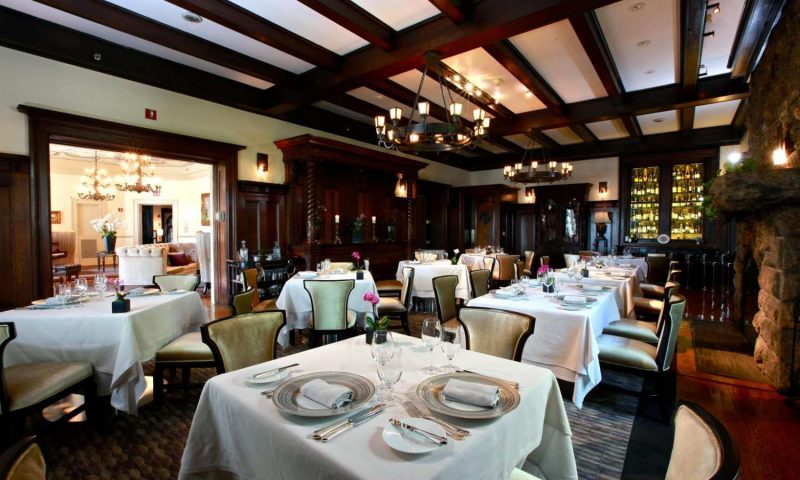 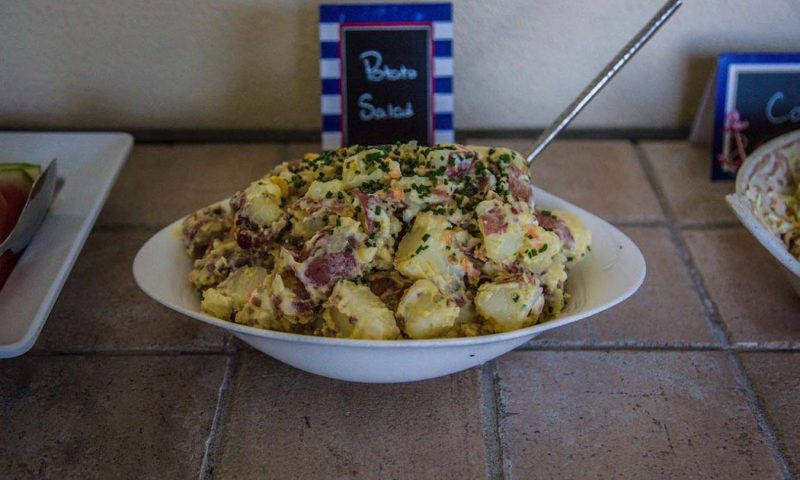 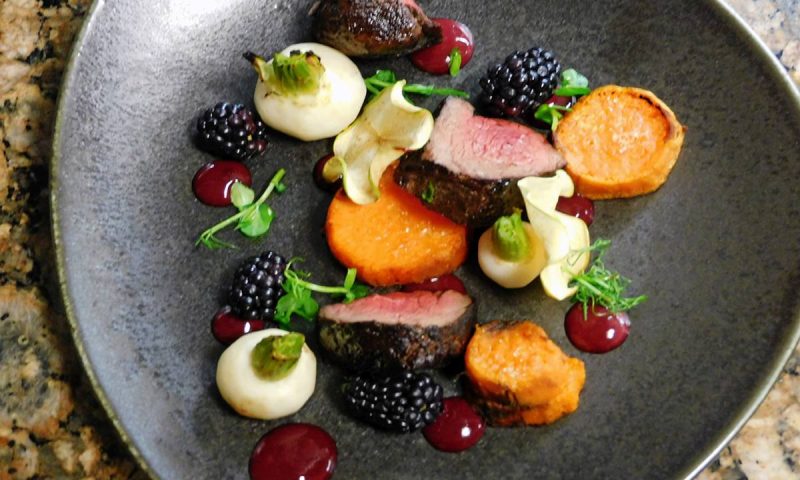 Castle Hotel & Spa is perched majestically atop one of the highest points in the region overlooking the historic Hudson River in the lower Hudson Valley of Westchester County, NY.

The award-winning estate is a member of Small Luxury Hotels of the World and Historic Hotels of America and sits on ten tranquil wooded acres that provide a respite of refinement and luxury with Old-World elegance.

The renowned Equus restaurant has received Four Diamonds from AAA, a Forbes Travel Guide Four-Star Award in 2015, and was rated “Excellent” by the New York Times, and given a Five-Star Diamond Award from The Academy of Hospitality Sciences.

Castle Hotel & Spa is also home to the luxurious Sankara Spa. Castle Hotel & Spa is owned and managed by Sankara Hospitality Group, known throughout the world for creating and managing contemporary luxury hotels that are defined by their warm and vibrant personality, and inspired by the spirit of their location.

We invite you to experience the unparalleled service, comfort and amenities that continue to be the hallmark of hospitality at the Castle.

The History
Long before the Castle Hotel & Spa gained its sterling reputation as a world-class destination for relaxing and romantic getaways with superb cuisine it held a prominent place in Westchester County and New York City society at the turn of the century.

The story of the Castle begins shortly before the turn of the 20th century, when General Howard Carroll, a well-respected newspaperman, playwright and businessman, purchased the land as a home for his growing family. “Carrollcliffe” was built in two stages between 1897 and 1910.

From the beginning, the Oak Room, historic in its own right, served as the family dining room. Legend has it that the room’s wainscoting was brought over to Tarrytown from General Carroll’s house in St. Germain, outside Paris. Louis XIV had presented this house to James II when he fled to France after having been deposed in England.

It was in this room that James’ grandson Prince Charles Edward (“Bonnie Prince Charles”) and Angus MacDonald, representing the Scottish highlanders, plotted the unsuccessful uprising of 1745 in the British Isles to overturn the German king and restore the lineage of James II.

Born in Albany, N.Y. in 1854, Howard Carroll was educated in Albany, New York City, Hanover and Gottingen in Germany, and Geneva, Switzerland. His first and longest position was with The New York Times, where he served as the Washington D.C. correspondent, befriending such leaders as Presidents Ulysses S. Grant and James Garfield.

After refusing several official appointments in the Chester Arthur administration, Carroll wrote several plays, including The American Countess, which ran for 200 nights on Broadway. He also authored two books.

General and Mrs. Carroll were notable social figures in Westchester County and New York City society. They entertained frequently and on a grand scale resplendent in the tasteful luxuries of the era.

Included among the invited guests were J.P. Morgan, Andrew Carnegie, foreign dignitaries and ambassadors who viewed the great river regattas from the Castle terrace.

It was said that the size and scope of the gathering convinced the Carrolls’ to expand their castle. A new addition, completed in 1910, provided the Great Hall as the new dining room, an adjacent pantry, a formal ballroom, and additional servants’ quarters, garage and stables.

Following General Carroll’s death in 1916, his widow and children, Caramai, Arthur and Lauren, occupied the Castle until 1940, when it was rented for a brief period to a local school. Today, the elegant Ballroom at the Castle is still known as the Caramai Ballroom.

In 1941, Emerson and Ruth Axe bought the Castle and 64 acres of land for $45,000, and turned it into the headquarters of H.W. Axe & Company, an investment counseling firm. Under their ownership, what became known as Axe Castle also was called “High Finance on the Hudson”.

As a military man, General Carroll undoubtedly would have approved of the Castle’s use during World War II. The roof and 75-foot tower were partially enclosed, and served as an observation post by the Tarrytown Civil Defense to monitor air traffic in the area.

In 1981, the town of Tarrytown designated The Castle a historic landmark, protecting the outside structure from any alterations in the future. Between 1994 and 1996 the Castle was transformed into a luxury hotel with a gourmet restaurant and meeting and event facilities.

The restoration of the Castle’s original suites, which offer spectacular views inside and out, and the creation of the 24-room addition named Carrollcliffe was a salute to its proud heritage.

In early 2013, the Castle Hotel & Spa underwent a thorough renovation and refurbishment adding a renewed aura of bygone elegance and refinement to historic property. The renovation also included the introduction of the luxurious THANN Sanctuary Spa, known throughout Asia as an oasis of peace and tranquility.

Throughout the meticulous restoration, every attempt was made to maintain the feeling of being in a cherished family home with a great deal of history and a storied past. The unique architectural elements of the main building of the Castle were carefully preserved to showcase the cherished collectibles gathered from around the globe.

Great attention to detail is evident in 3,300 square feet of meeting and event rooms each of which has a strong history in the Castle. The 1,500 square-foot Great Hall is perhaps the most spectacular meeting and event space, featuring 40-foot vaulted ceilings and original Gothic windows with heraldic motifs.

The graceful atmosphere of crystal chandeliers and artistic moldings encircle the entire 1,500 square-foot Caramai Ballroom that is soaked in abundant natural light and features carefully selected colors and fabrics that bring new and modern colors tones that accentuate the preserved moldings and other fine accents that make this an elegant setting for productive meetings and memorable social gatherings, romantic weddings, and special occasions.

The time-honored Library features rich Mahogany bookcases and a dramatic panel ceiling in Neo-Classical style contribute to the room’s old-world beauty and charm.

ROOMS & SUITES
One of the Hudson Valley luxury hotels, Castle Hotel & Spa accommodations feature 31 newly renovated and refurbished guest rooms and suites reflecting a renewed luxury and sophistication. Castle Hotel & Spa is a smoke-free environment since 1998. For the comfort and security of our hotel guests, non-Service Pets are not permitted at The Castle.

Luxury Suite
The original Castle building features our large newly renovated luxury suites. Each luxury suite is individually designed in opulent and comfortable themes with a rich romantic palette or with bold deep tones and accents.

Each includes a sizable living room, bedroom and one king-size four-post bed. We offer the most luxurious imported linens and goose-down comforters in a suite furnished with traditional armoires in both the living room and bedroom.

Junior Suite
Each Junior Suite at Castle Hotel & Spa is nestled in Carrollcliffe, the newest wing of the Castle with one king-size bed and an alcove sitting area. Each room has a private bath with a free-standing shower and a bath tub. The Castle Junior Suite offer a spacious and efficient desk with a telephone and luxurious amenities.

Deluxe King
Each Deluxe King Room is located in Carrollcliffe, the newest wing of the Castle with one king-size bed, private bath with a shower/tub combination. Each room features a spacious and efficient desk including telephone.

Weddings
Castle Hotel & Spa offers the perfect backdrop of all Westchester wedding venues. Your guests will marvel at the architecture and ornate décor, capturing the romance of an era that lends itself to endless photo opportunities. Our artfully landscaped grounds provide a tranquil setting for an outdoor wedding ceremony and cocktail reception.

Lyndhurst, also known as the Jay Gould estate, is a Gothic Revival country house that sits in its own 67-acre park beside the Hudson River in Tarrytown, New York, about a half mile south of the Tappan Zee Bridge on US 9. The house was designated a National Historic Landmark in 1966

Sailing On The Hudson

Discover the beauty and history of Hudson River through our partner Nyack Boat Charter in Nyack, New York. English explorer Henry Hudson, believed to have been born in the late 16th century, made two unsuccessful sailing voyages in search of an ice-free passage to Asia.

In 1609, he embarked on a third voyage funded by the Dutch East India Company that took him to the New World and the river that would be given his name. Our exclusive “Sailing-on-The Hudson Package available from April – October. 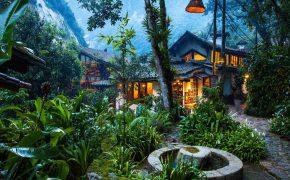 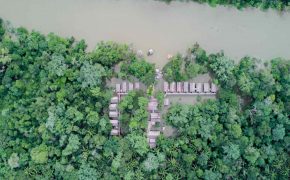 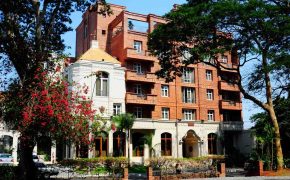