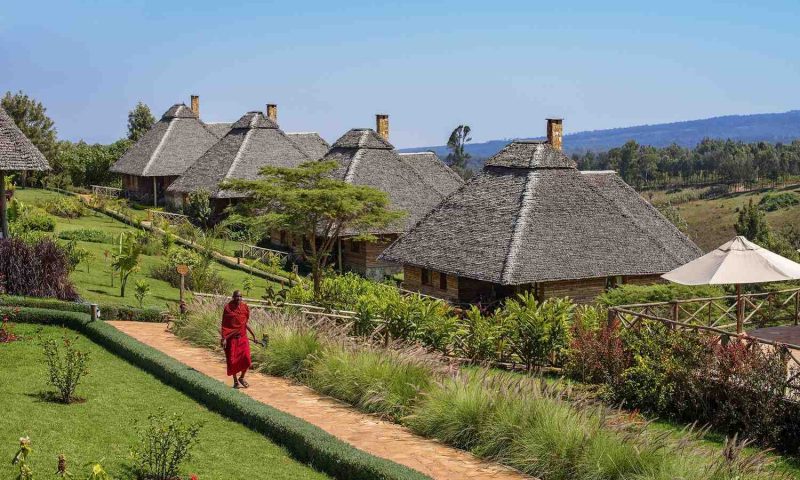 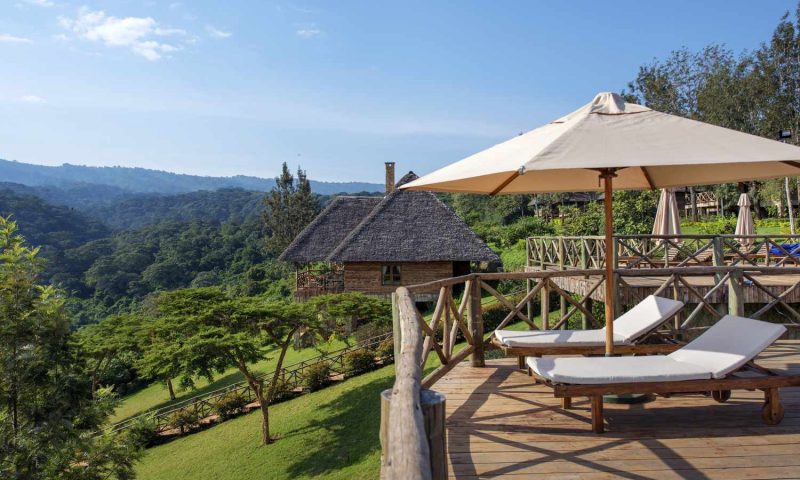 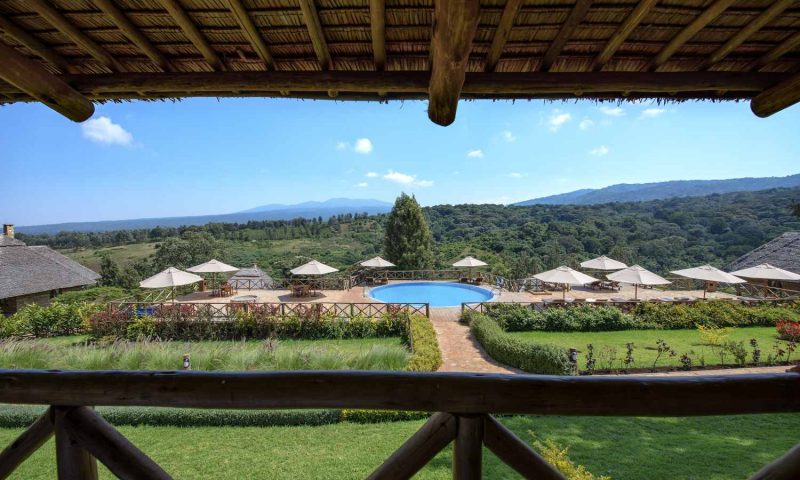 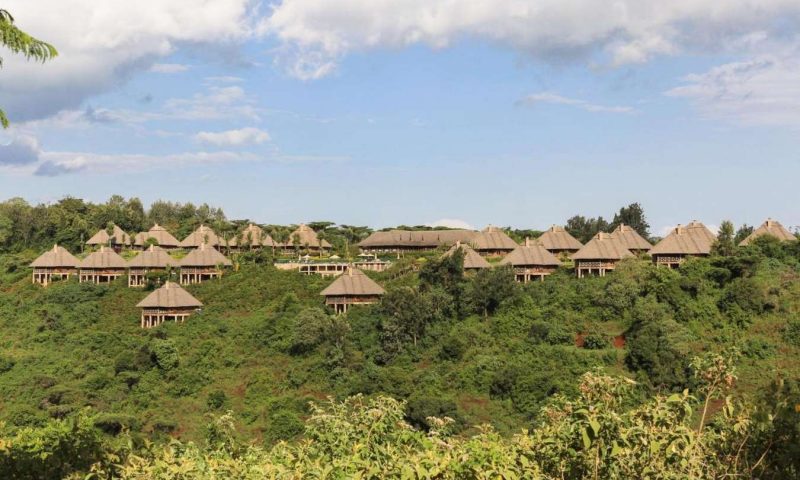 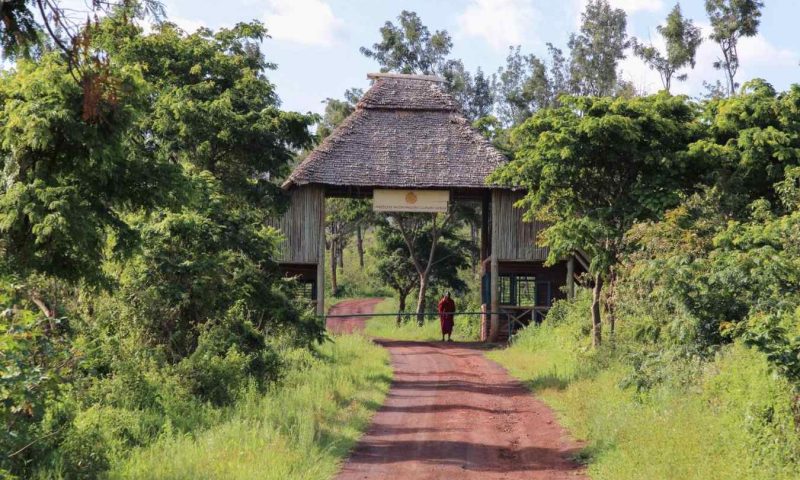 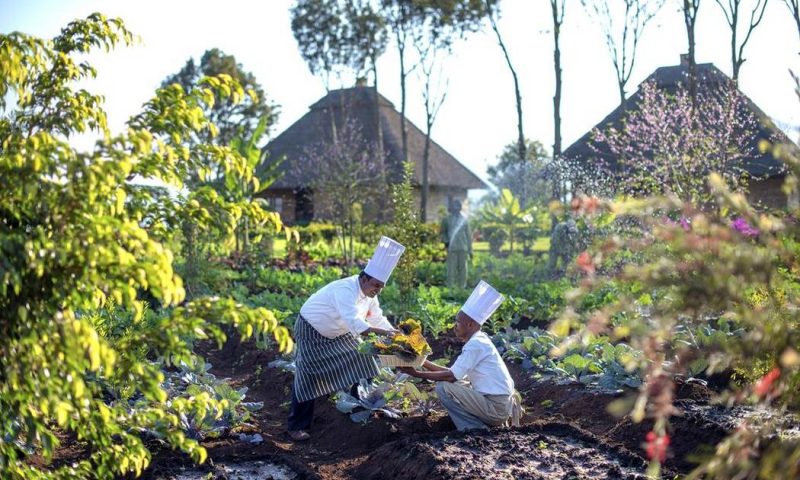 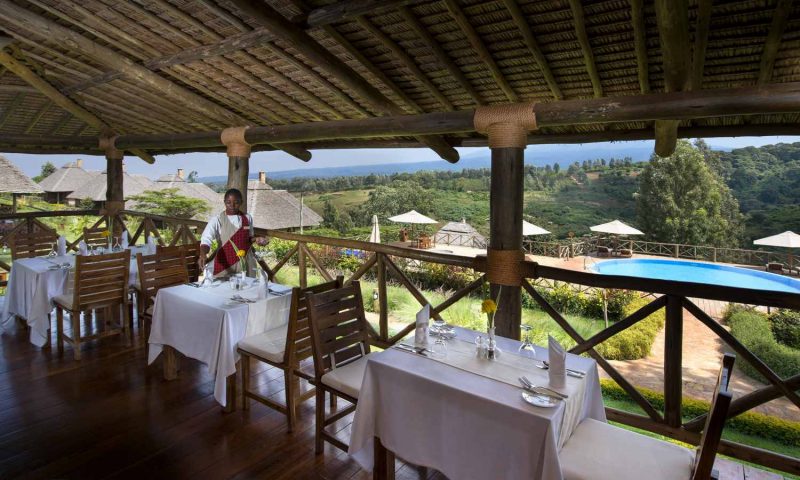 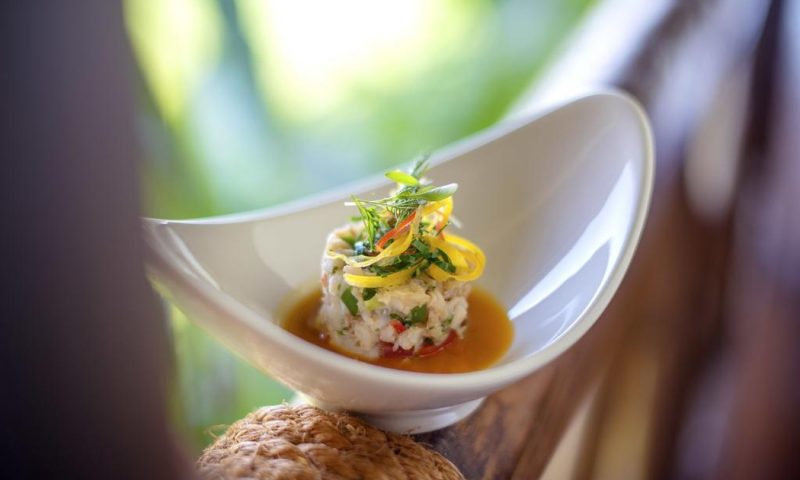 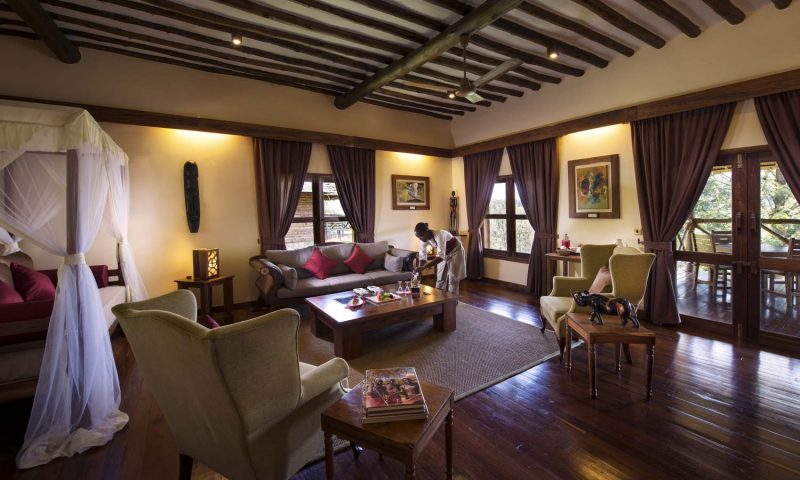 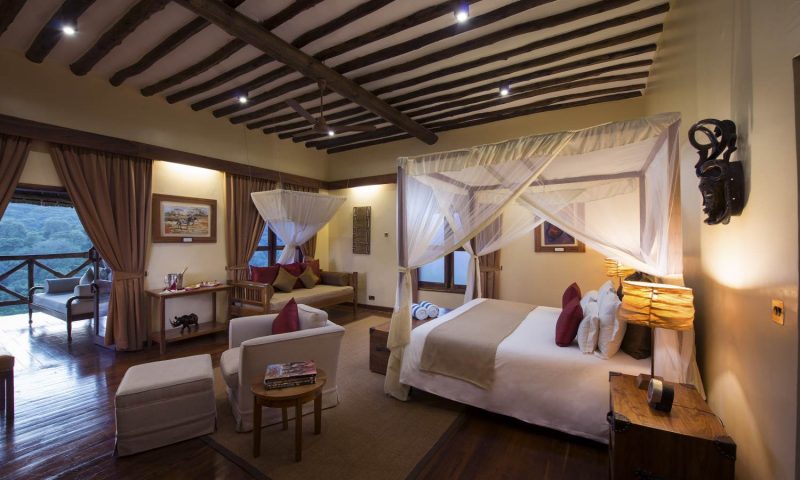 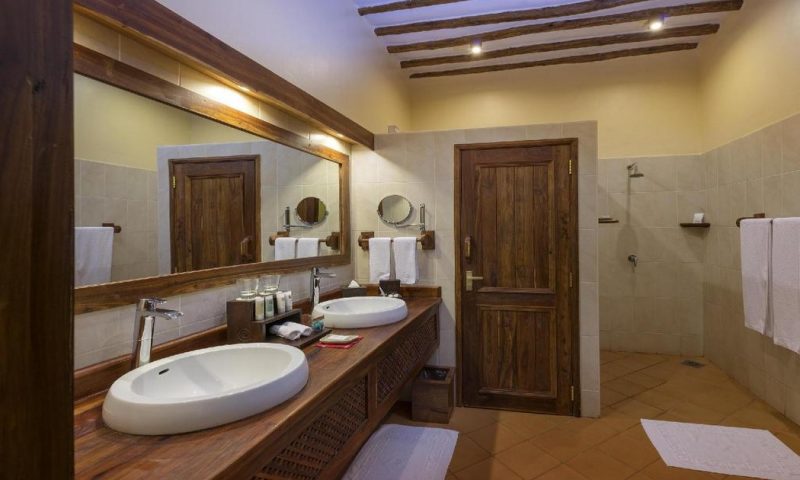 Set in 50 acres of virgin Tanzanian bush in the Ngorongoro volcanic landscape, this all suites wood log cabin style retreat is located a few steps from the Game Reserve Gate and 20 minutes’ drive away from the Ngorongoro Crater that is said to have the most dense concentration of wildlife in Africa.

This all inclusive property features 20 spacious private log cabins with fire place, a restaurant, a bar and conference facilities. Indulge in moments of relaxation at the swimming pool or at the Earth & Rain Spa after a full-day game drive.

The Accacia Restaurant
The formal dining room features an outdoor terrace and offers a healthy buffet option and à la carte for breakfast, lunch and dinner, with light and tasty Mediterranean cuisine fused with local dishes.

The majority of the meat, fruits and dairy products are sourced from our vegetable garden and from the communities that surround the conservation area

The Zebar Bar
Relax and enjoy your favourite drink or cocktail when reading one of the numerous safaris and Africa dedicated books available at the lodge. The traditionally decorated ambience offers a peaceful and calm atmosphere during the day and in the early evenings. Open from 10.00 to 23.00

The Spa
After a long day of exploration in the African wilderness, there is no better way of finishing the day than by indulging yourself in a pampering session that will immediately relax and soothe your mind and body.

Earth & Rain Spa is an oasis of tranquility where you can enjoy relaxing and invigorating massages, face and body treatments and many other signature treatments while being captured into the curative atmosphere of the unspoiled African bush .

In Africa, rain gives life and life depends on it…Rain is the gift that brings simple wealth to the earth and all those on it. Rain refreshes in the still heat of the day, it cools thirsty land, awakens the senses and sharpens the aromas of the bush.

Capturing the beauty and magic of African décor, Earth & Rain Spa blends earthy colors and dramatic images to evoke a sensory journey and invites guest to build a personal experience in its calming space. Here you will find everything you need to soothe body and mind.

Our tempting choices of treatments are based on ancient African, Asian and European traditions designed to soothe the spirit, rejuvenate the body and enrich the mind. After experiencing the attentive service and warm ambience, you will not want your visit to Earth & Rain Spa to end and you will return again and again.

Area Guide
The jewel in Ngorongoro’s crown is a deep, volcanic crater, the largest un flooded and unbroken caldera in the world. About 20kms across, 600 meters deep and 300 sq kms in area, the Ngorongoro Crater is a breathtaking natural wonder.

The Ngorongoro Conservation Area (NCA), measuring 8,300 square kilometres, is also the only place on earth where mankind and wild animals co-exist in harmony. The NCA became a Man and Biosphere Reserve in 1971 and was declared a World Heritage Site by UNESCO in 1979.

Originally part of the Serengeti National Park when the latter was established by the British in 1951, in 1959 the Ngorongoro Conservation Area Authority (NCAA) was formed, separating NCA from Serengeti.

Land within the area is multi-use, providing protection status for wildlife while also permitting human habitation. Its uniqueness lays in the fact that the NCA is where man, livestock and wild animals live in peace: Maasai cattle can sometimes be seen grazing alongside zebras on Ngorongoro’s grassland.

Apart from conserving world heritage, Ngorongoro plays a major role in national development. “We pay 30 per cent corporate tax, 3 per cent tourism tax, and remit 10 per cent of our earnings to the treasury”, explains Bernard Murunya, the NCAA’s Chief Conservator.

“We also give over US$125,000 to the local District Council as well as supporting the area’s Pastoralist Council, in addition to funding various community projects such as schools, hospitals, veterinary services and road construction,” he adds.

The NCCA’s wildlife and land has been a UNESCO site since 1979 and now its cultural heritage is to be included. The NCA is the only site in the world with a high concentration of wildlife living in harmony with human communities.

The multiple land use systems in this area are among the earliest to be established around the world as a means of reconciling human development and conserving natural resources. The NCA also contains numerous paleontological, archaeological, and anthropological sites of exceptional quality.

Had it not become the world’s sixth-largest unbroken caldera, then what is now known as the Ngorongoro crater could have been a towering volcanic mountain, as high as Kilimanjaro.

The crater is the flagship tourism feature for the Ngorongoro Conservation Area. It is a large, unbroken, un-flooded caldera, formed when a giant volcano exploded and collapsed some three million years ago.

The Ngorongoro crater sinks to a depth of 610 metres, with a base area covering 260 square kilometres. The height of the original volcano must have ranged between 4,500 to 5,800 metres high.

Apart from the main caldera, Ngorongoro also has two other volcanic craters: Olmoti and Empakai, the former famous for its stunning waterfalls, and the latter holding a deep lake and lush, green walls.

On the leeward of the Ngorongoro highlands protrudes the iconic Oldonyo Lengai, an active volcano and Tanzania’s third highest peak after Kilimanjaro and Meru.

Known to local people as the Mountain of God, Mount Lengai’s last major eruption occurred in 2007. At the mountain’s foot is Lake Natron, East Africa’s major breeding ground for flamingoes.

The crater also has the densest known population of lions, numbering 62. Higher up, in the rainforests of the crater rim, are leopards, about 30 large elephants, mountain reedbuck and more than 4,000 buffalos, spotted hyenas, jackals, rare wild dogs, cheetahs, and other felines.

The legendary annual wildebeest and zebra migration also passes through Ngorongoro, when the 1.7 million ungulates move south into the area in December then move out heading north in June.

The migrants passing through the plains of the reserve include 1.7 million wildebeest, 260,000 zebra, and 470,000 gazelles. The Lake Ndutu area to the west has significant cheetah and lion populations.

Over 500 species of bird have been recorded within the NCA. These include ostrich, white pelican, and greater and lesser flamingo on Lake Magadi within the crater, Lake Ndutu, and in the Empakaai Crater Lake, where a vast bird population can be observed.

Game drives through the Ngorongoro Crater begin early in the morning in closed safari vehicles with pop – up roofs. Accompanied by an expert ranger, a magnificent experience is sure to be had!

The descent into the crater is one of scenic beauty, as you make your way through lush forests, home to numerous elephants and buffalo.

As you reach the inside of the Ngorongoro Crater, marvelling at the incredible landscape around you, your ranger will take you through the grassy crater floor, the unbelievable fever tree forest, the banks of Lake Magadi and the surrounding marshes.

Lunch is served picnic style, surrounded by the natural wonders around you as well as the exceptional wildlife, roaming freely, with which you share this extraordinary paradise.

After being woken up by the delicious smell of freshly ground coffee, a delicious cup of tea or a succulent cup of hot chocolate, our safari experts will guide you through the wonders of the African bush and the beauties of the Reserve’s wildlife just as the colors of the sunrise enlighten the day.

You will be driven in our 4×4 vehicles by our highly qualified drivers through the Masai grassland. You will then return to camp to enjoy a perfectly set breakfast. The compact game-viewing circuit through Manyara offers a virtual microcosm of the Tanzanian safari experience.

From the entrance gate, the road winds through an expanse of lush jungle-like groundwater forest where hundred-strong baboon troops lounge along the roadside and blue monkeys scamper between the ancient mahogany trees.

Large buffalo, wildebeest and zebra herds congregate on the grassy plains, as do giraffes – some so dark in coloration that they appear to be black from a distance. Inland of the floodplain, a narrow belt of acacia woodland is the favoured haunt of Manyara’s legendary tree-climbing lions and impressively tusked elephants.

Manyara provides the perfect introduction to Tanzania’s birdlife. More than 400 species have been recorded, and even a first-time visitor to Africa might reasonably expect to observe 100 of these in one day.

After breakfast, leave Ngorongoro heading for the endless plains of Serengeti to visit the Olduvai Gorge is a canyon carved by water through the southern part of the Serengeti Plain.

The gorge is about 50 km long and in some places 90 metres deep. It drains the slopes of the nearby mountains plus the Serengeti Plain. We will visti the historic site know as “The Cradle of Mankind” where the world famous archeologist, Dr Leakey, discovered the remains of the early man. 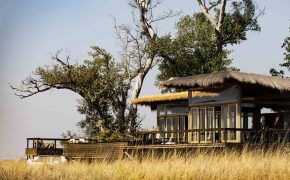 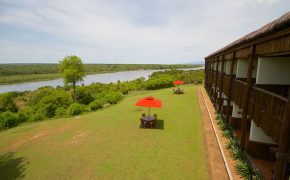 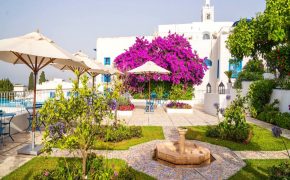