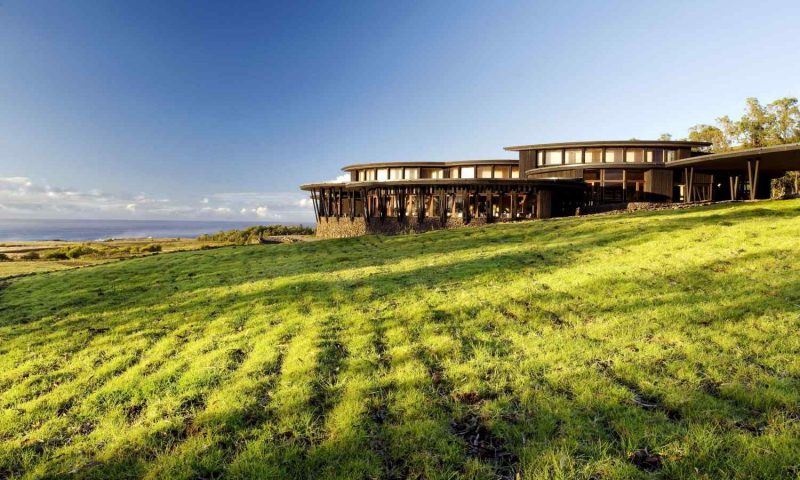 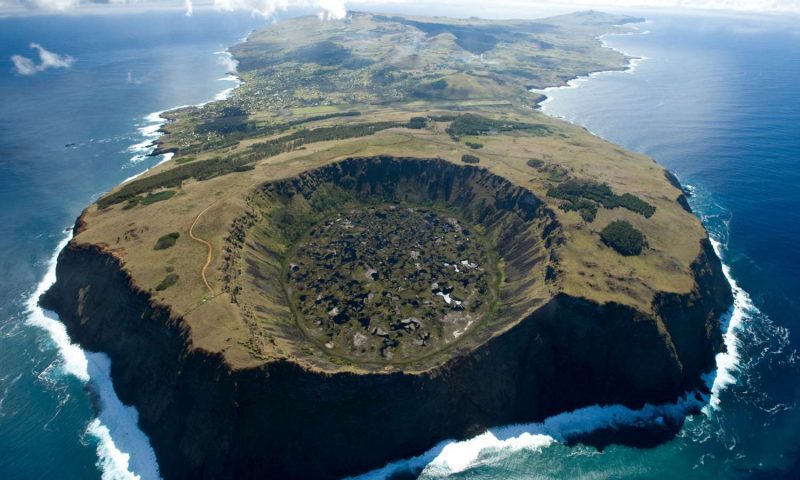 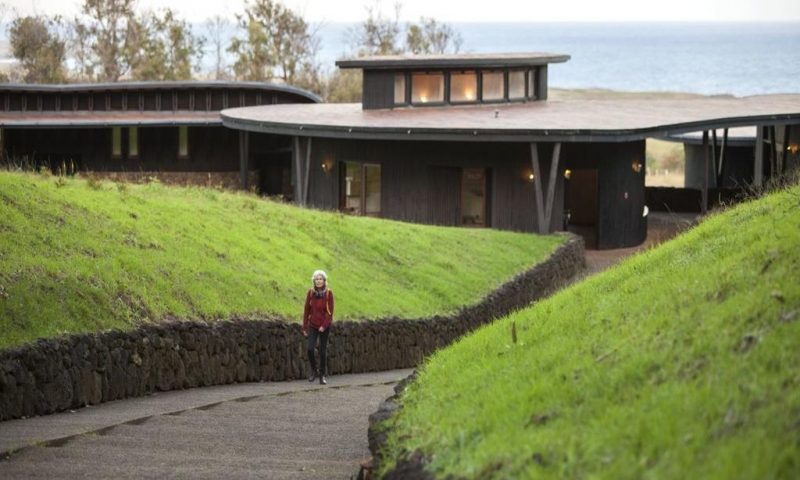 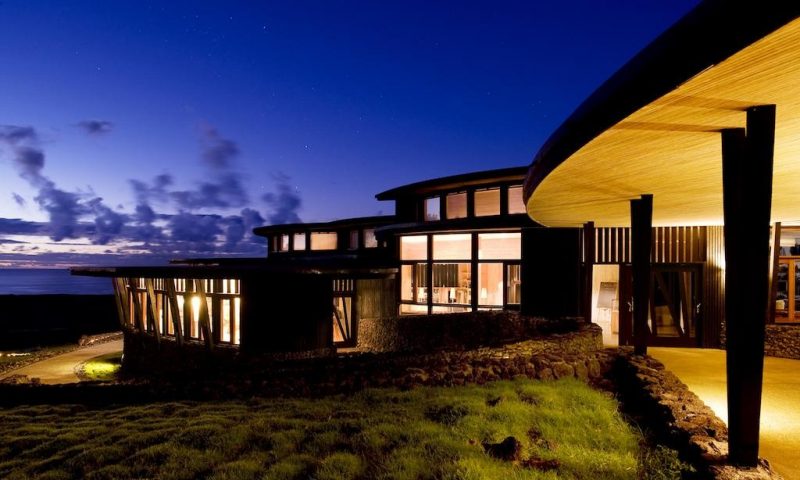 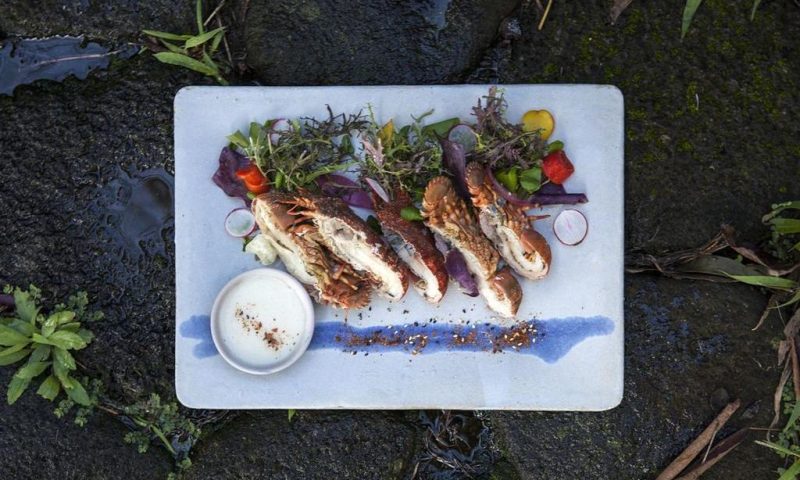 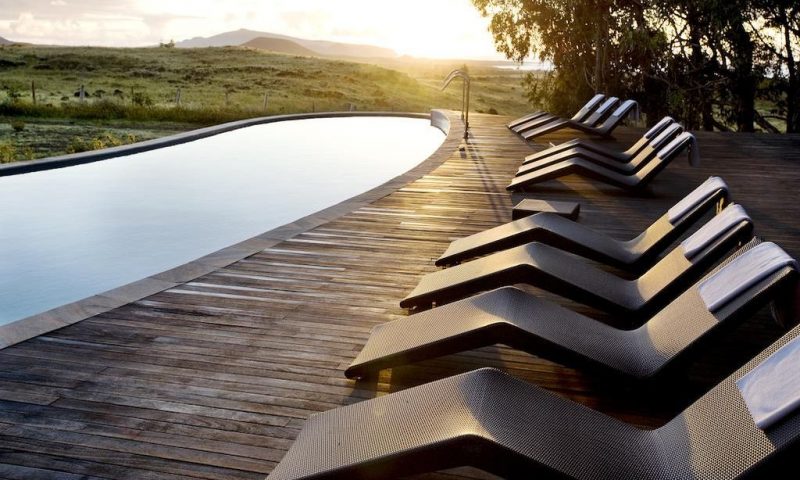 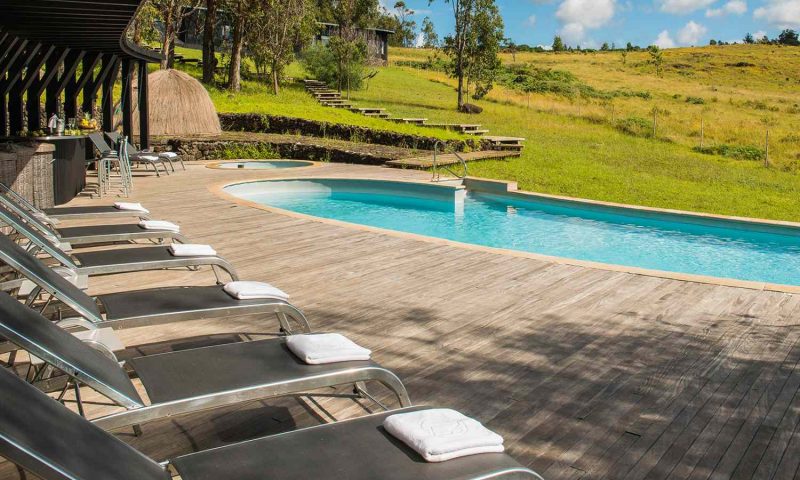 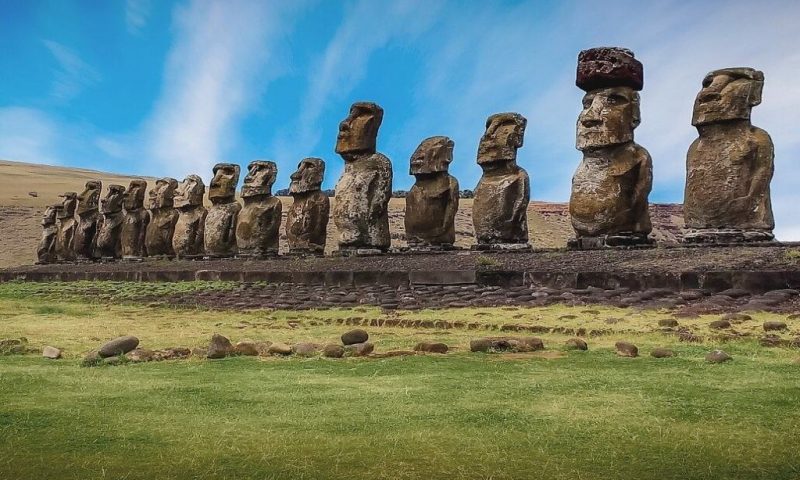 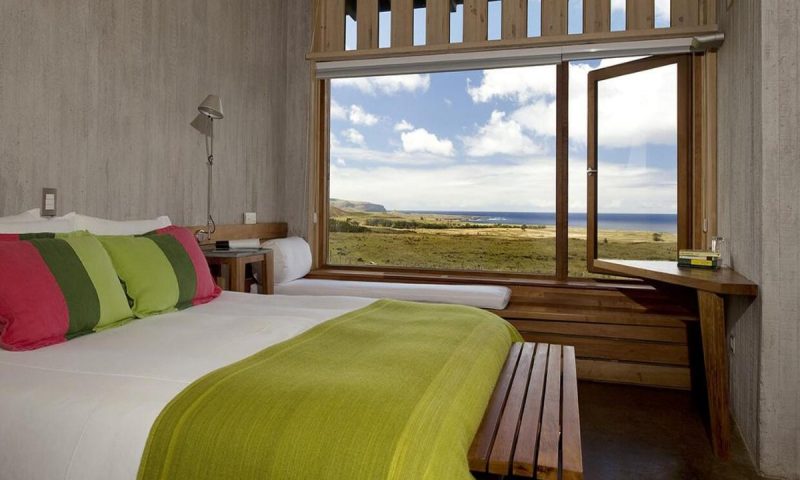 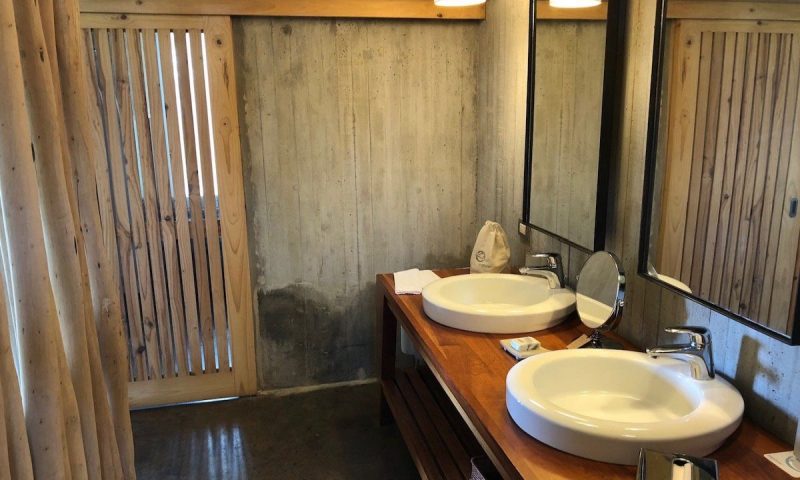 Rapa Nui may be a tiny island stranded in the infinite Pacific Ocean, yet it’s safe to say that never has a single place puzzled the world as much as this one.

A miniscule triangle born from the eruption of three volcanoes, the outmost border of the Polynesian triangle sits 2,180 miles off the South American continent and is surrounded by the clearest waters on the planet – the very definition of ‘remote’.

Rapa Nui was once the cradle of a unique and enigmatic culture that continues to endure today. The island’s language, music, and countless traditions are kept alive by its proud inhabitants, while the enormous carved stone Moai are tangible testimonies of its enigmatic past.

Explora lodge in Rapa Nui lodge sits on a privileged and secluded location within the island, surrounded by trees, prairies and far-reaching views over the vast, blue Pacific Ocean.

ARCHITECTURE
Explora actively introduces travelers to the great scenery of South America, through a well prepared exploration program. Our base is a hotel built for linking man to temporary space -present and past- and the mysteries of nature.

VARUA ROOM
Designed to take full advantage of the silence, privacy, and spaciousness of the surrounding landscape, ensuring deep rest after a long day of exploration.

LOCAL CUISINE
Our dishes are always accompanied by a superb Chilean wine. We also carry a menu of Premium wines for those that would like to try other alternatives.

EXPLORER´S BAR
The Explorer’s Bar is the meeting place of our guides for planning explorations. Stocked with liquor and Chilean wines, the bar is frequently the meeting point of returning groups at nightfall.

EXPLORATIONS
Easter Island’s inhabitation has baffled anthropologists for centuries. The volcanic formation rises abruptly from the infinite South-Pacific Ocean, redefining the sense of distance, mystery and wonder of all who visit its shores.

At Explora, there are over 30 different guided hike, bike rides, snorkeling and scuba diving explorations to immerse in to Easter Island. All our explorations are made in small groups, have different difficulty levels ranging from easy to expert, and have different durations, half day or full day.

POIKE
Together, wind, sea and fire have carved a unique identity for each corner of the island, all contrasted against the ever-clear pantone of isolation. This zone is the tip of a vast volcanic peninsula and the island’s easternmost point.

Its geographic position has caused severe erosion, which drove its inhabitants to abandon the area over 600 years ago. As a result, this zone is of unique, untouched beauty.

The Poike zone, named after the oldest volcano on the island, offers some of its most unusual sceneries, with harsh conditions evidencing how the Rapa Nui is eroded by sea and water, one of the its people’s most pressing ecological predicaments.

THE SOUTH
The island’s very existence is testament to a battle fought long ago between fire and sea.

This zone comprises the south-facing lowlands, where four territorial clan divisions and numerous archeological vestiges, including agricultural tools and ceremonial instruments, have allowed researchers to understand and reconstruct important clues of Rapa Nui’s past.

The Akahanga sector is of particular interest in this zone, as are the dramatic waves caused by intense oceanic wind currents

LAVA FLOWS
From water came lava and from lava came land. Tales to be told only by the elements themselves. As the byproduct of a series of volcanic eruptions, Rapa Nui is dotted with vestiges of its geographic past.

Numerous rock wells and caverns, most of which are important sources of water, account for this zone’s once high population. The island’s most recent lava movements have been found here, originating from the nearby Maunga Terevaka, Rapa Nui’s largest volcano.

Accordingly, the surrounding landscape is overall irregular and interrupted by vestiges of volcanic activity, which also characterize the zone’s memorable skyline.

RANO KAU
As one of the volcanoes from which the island originated, Rano Kau’s vigilant gaze defines Rapa Nui’s enigmatic cultural landscape. Located in Southeastern Rapa Nui, the dormant volcano’s lowlands host a substantial part of the population.

Towards the coast, Hanga Roa bay has offered shelter to nomad vessels throughout history. As well as various settlement types, this zone’s coastal area is home to numerous ceremonial archaeological sites, such as the Vinapu ahu, one of the largest in its kind.

Not to be missed are the volcano’s gigantic crater lake and the Orongo ceremonial village, where a large part of the island’s heritage is preserved, studied and accessed by visitors.

MIRU
We climb mountains not only on foot, but also in heart and mind, often reaching places reserved for only a few sky-scraping birds and travelers in search of movement and contemplation alike.

At 1,664.73 ft, the Maunga Terevaka, is Rapa Nui’s highest peak, providing a lookout so isolated that you can distinguish our planet’s curvature in the horizon. Given its prominence, this zone was once occupied by the Miru aristocracy in the pre-Christian era.

The zone’s lowlands, which include the island’s north and northeastern coasts, host many archaeological vestiges, most of which remain intact and have therefore been vital clues in understanding the island’s mysterious past.

HOTU ITI
Hotu ‘Iti is the zone located on the Rano Raraku volcano’s slopes and plains. Its role in Rapa nui culture is of upmost significance, as it is here where most moai were quarried from.

Given the zone’s socio-cultural significance, some of the most remarkable Rapanui archaeological vestiges can be found within, including the Ahu Tongariki, which was damaged by civil wars and a powerful tsunami.

The ceremonial site was restored in the 90s and now includes fifteen moai, all of which face the sunset during the summer solstice.

MOANA
A tiny speck on the infinite blue Pacific Ocean. The definition of remote. The ocean plays a key role in Rapanui culture.

Not only did the island’s first inhabitants arrive by sea, but it this isolation also kept generations to come from ever leaving. Furthermore, seafood and fish are an important part of Rapa Nui’s culinary heritage to this day. The waters surrounding the island offer a unique clarity for sea explorations.

This is due to low levels of plankton in the area, which also cause a lower number of larger species to be found. Regardless, however, marine fauna on Easter Island is endemic to its waters, which is why scuba diving and snorkeling are highly recommended.

HIKE
We hike throughout our locations. Walking at your own, committed pace, allows you to immerse in the natural and cultural landscapes we explore, varying in intensity –beginner or advanced– and duration – half day to full day.

OVERLAND
These are van-led explorations interrupted by short-duration hikes along the way. The combination allows travelers to access areas of particular beauty and ecological significance.

BIKE
Biking allows us to explore and discover greater distances, feeling how the elements change throughout the day, varying in intensity –beginner or advanced– and duration – half day to full day.

SELF GUIDED
The company and knowledge of one of our guides, is available for you to discover unique locations in the areas surrounding our lodge – either on foot or bicycle. For further information approach our exploration team.

AT THE SEA
The ocean is a world in itself: infinite and abundant. To access its many mysteries travelers can choose between snorkeling and scuba diving, or both.

COMBINATION
Within a same day we can combine different types of exploration – starting with a hike followed by a bike-ride, a horseback-ride or vice versa.

THE MIRU
We follow a trail along cliffs in the north area, crossing plains and ancient villages that belonged to the Miru, which used to be the most powerful tribe in Rapa Nui. We continue hiking up to Anakena, this tribe’s capital city, where we get some time to enjoy the beach. Bring your swimsuit.

The zone’s lowlands, which include the north and northeastern coasts, host many archaeological vestiges, most of which remain intact and have therefore been vital clues in understanding the island’s mysterious past.

RAPA NUI SANCTUARIES
We visit Akivi with the Ahu of the 7 moai facing the sea. We walk the Roiho lava field, where we visit a lava tunnel, the Ana Te Pahu cave. We continue by van to visit the Ahu Huri A Urenga, a platform located in the interior of the island that is aligned with the sunrise on the winter solstice. We return by van.

From water came lava and from lava came land. Tales to be told only by the elements themselves. The surrounding landscape is overall irregular and interrupted by vestiges of volcanic activity, which also characterize the zone’s memorable skyline.

LA PENINSULA
We leave by van towards Mahatua, an ancient Rapa Nui settlement. Then we bike ride to the Tea Tea Mountain, in the Poike peninsula. We then follow along the south coastline cliffs and reach Ahu Tongariki, the Island’s largest platform from where we return taking byways.

The Poike zone, named after the oldest volcano on the island, offers some of its most unusual sceneries, with harsh conditions evidencing how the Rapa Nui is eroded by sea and water, one of the its people’s most pressing ecological predicaments.

HANGA ROA
For those travelers who want to explore the town of Hanga Roa independently, we offer you the option to go during your stay. Request map and recommendations from our guides. As one of the volcanoes from which the island originated, Rano Kau’s vigilant gaze defines Rapa Nui’s enigmatic cultural

SNORKELING BIRD ISLETS
We take a van from the lodge to Hanga Roa’s cove, where we take a boat to sea caves with views to the cliffs, the Rano Kau crater and Motus, the famous islets due to the Birdman competition. We can snorkel around the Motus due to unbeatable clear water conditions.

The waters surrounding the island offer a unique clarity for sea explorations. This is due to low levels of plankton in the area, which also cause a lower number of larger species to be found.

SNORKELING MOTU TAUTARA
Departure by van from the lodge to the Hanga Roa cove, where we take a boat north to the Motu Tautara, an islet that is located very close to the island and in front of Ana Kakenga, a cave also known as two windows.

During the boat trip you can appreciate a different view of the Tahai complex, as well as other archaeological sites located on the northwest coast of the island.

The area where the Motu Tautara is located is part of a protected coastal marine area in which corals and a diversity of marine fauna can be seen, in addition to endemic species.

The waters surrounding the island offer a unique clarity for sea explorations. This is due to low levels of plankton in the area, which also cause a lower number of larger species to be found.

SCUBA DIVING
This exploration is the easiest way to get to know Rapa Nui’s amazing submarine world. It includes two stages: The first stage where a guide teaches diving theory and conducts a controlled immersion so that guests can get used to the equipment and perform some exercises.

The second stage involves a dive in the Hanga Roa bay, experiencing diving in waters known worldwide for their visibility. After completing the diving experience, the traveler gets a discovery or baptism PADI Certificate.

RAPA NUI DIVING
Private diving for travelers with diving certificates, either beginner’s or advanced. This exploration is an invitation to discover Easter Island’s underwater world and includes two dives.

Some of the places we visit include the sunken moai the Nui and Iti motus, surrounded by corals, and the Cathedral, a complex of submarine caves. 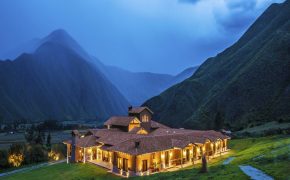 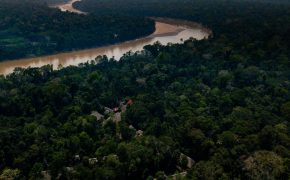 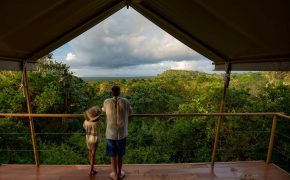