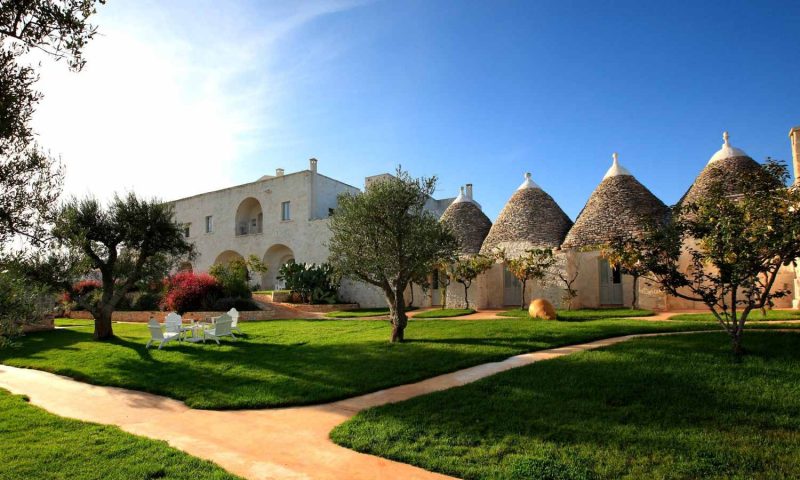 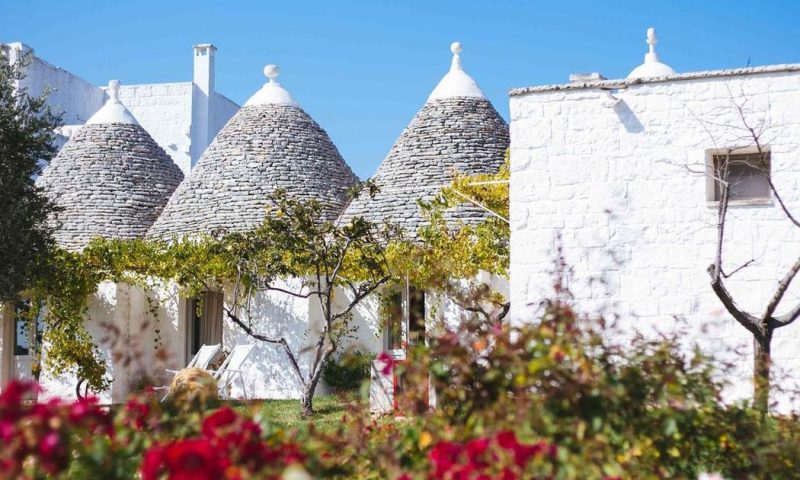 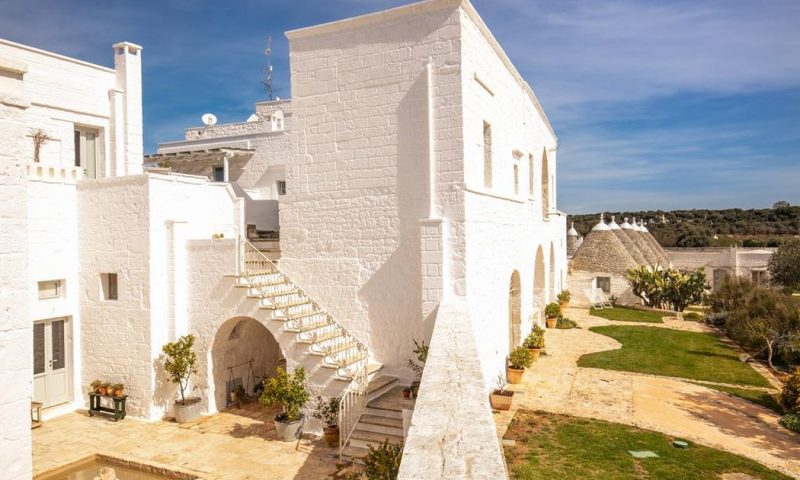 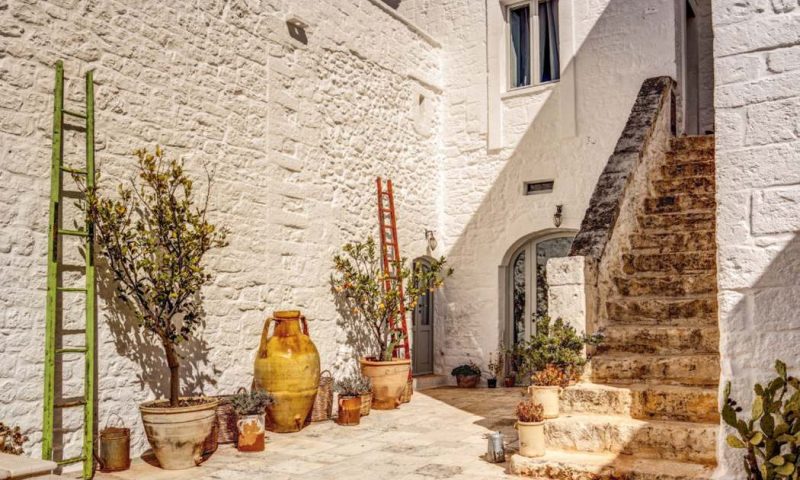 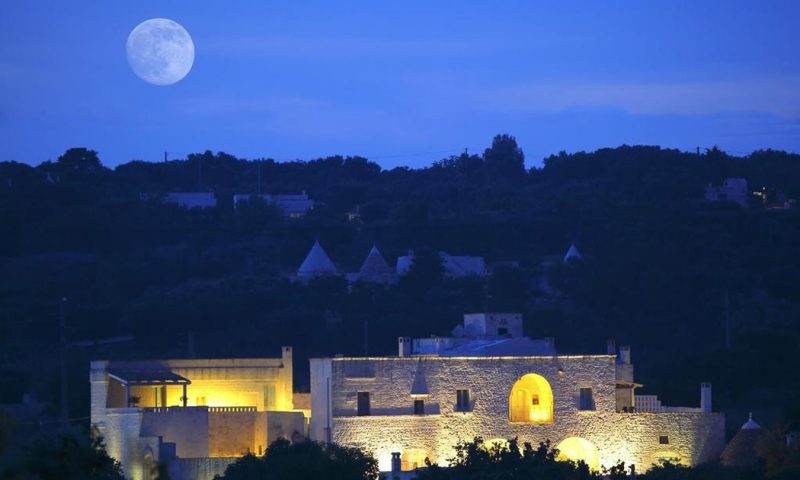 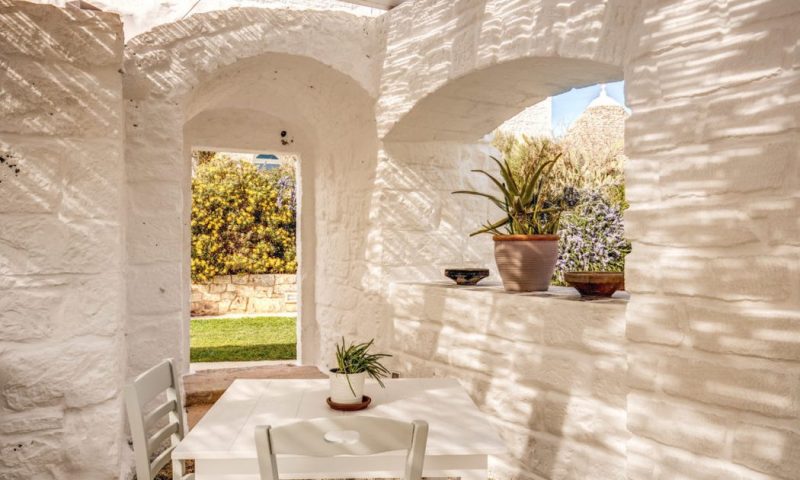 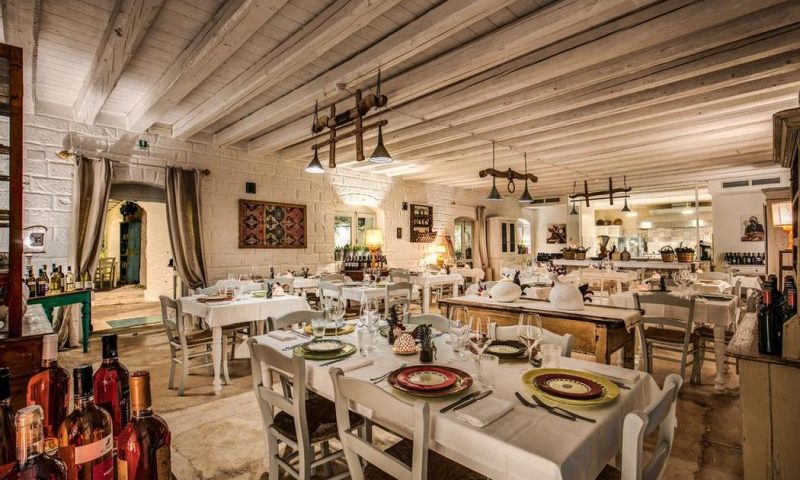 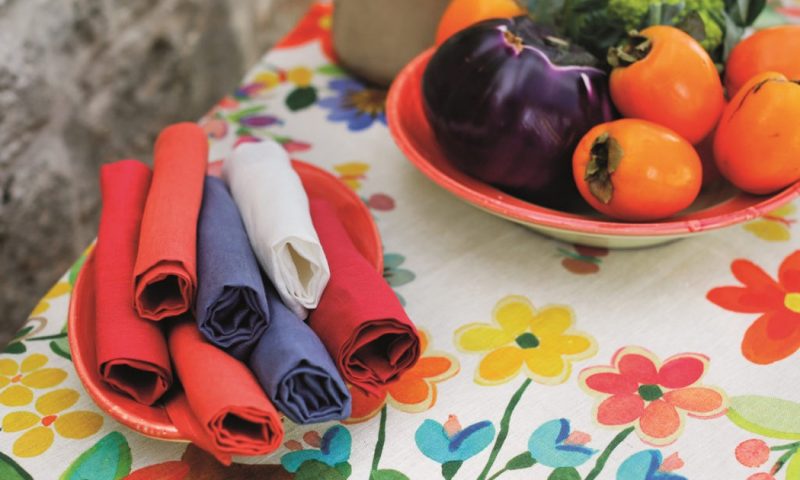 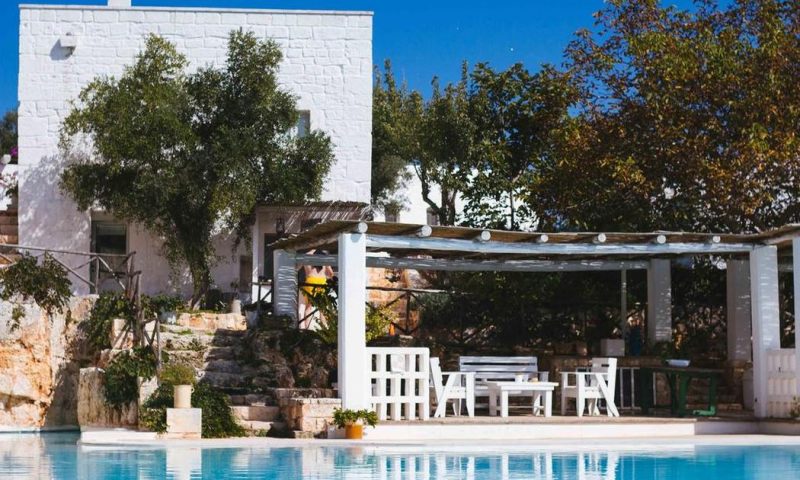 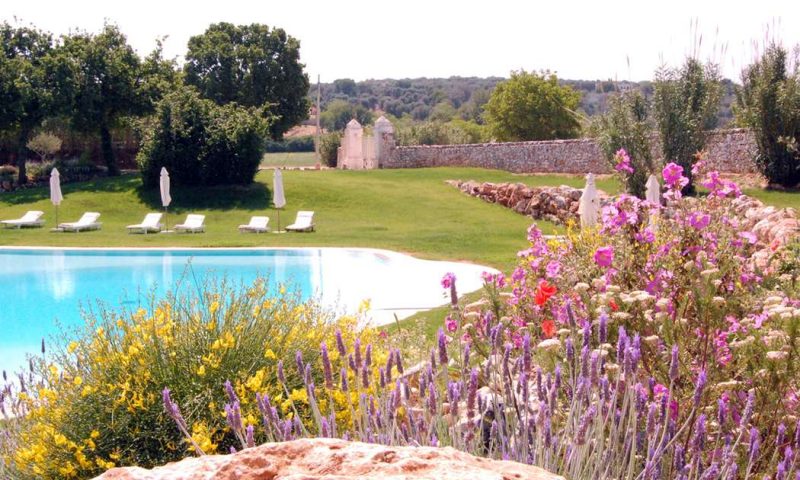 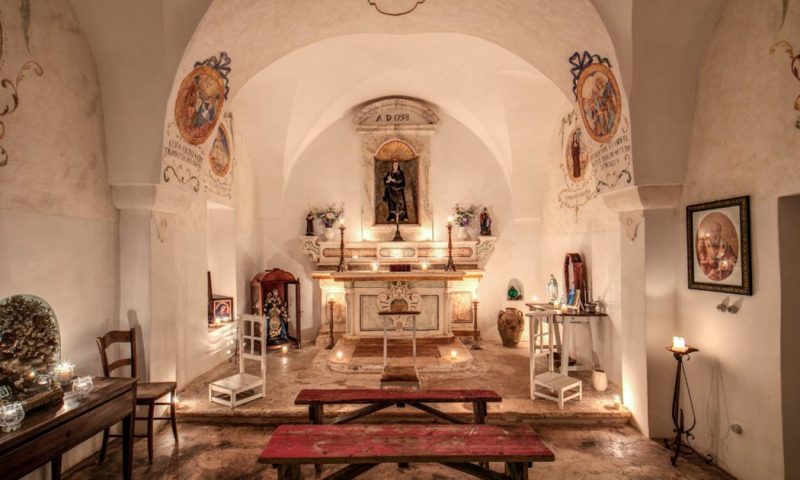 Masseria Cervarolo is a farm with trulli (typical Apulian rural houses) built in the XVI century. It stands on a 250 meters hillock that dominates a large and fertile plain, just 6 km away from the town of Ostuni.

Throughout the centuries, several parts of the Masseria have changed their look and purpose in order to favour the different cultivations and activities that took place in the farm.

The toponym “Cervarolo” derives from the presence of deer in the area, once characterised by dense forests. A small church, dedicated to Our Lady Of Sorrow Virgin Mary (1798) is annexed to the Masseria. It is characterised by a wonderful polychromatic baroque altar and several frescos.

As the presence of numerous written prayers testifies, this church was a very important place of adoration. All the legends related to Masseria Cervarolo made this place a destination for those pilgrims who were looking for serenity and interior peace.

It is also said that, in the area of the Masseria, spring comes some weeks in advance and the farmers living in the surrounding area adapt their agricultural activity to this phenomenon.

The restoration works, which lasted for 5 years, were carried out with the aim to respect and preserve the original building. We created an amazing and elegant countryside house where our family looks forward to hosting you.

The Restaurant
The restaurant of the Masseria is located within a large Lamia, a typical Apulian construction. As in a theatre, you can observe our chef cooking our specialities through a vast glass wall.

During Spring and Summer, dinner is served in an ancient orangery situated in one of the gardens. The restaurant is for the use of hotel guests only.

Dinner
Our restaurant offers numerous Apulian dishes which are sometimes revisited by our Chef, without ever ignoring the guidelines of the Mediterranean cuisine. Furthermore, you can taste our typical Km 0 products and combine your meal with the best wines of Puglia.

Breakfast
Breakfast is served in the restaurant. The buffet is enriched by our very own production of cakes and jams and by a great variety of fresh juices, seasonal fruits, salami and typical cheeses.

The Bar
By the swimming pool, on the warm days and evenings of summer, the Boukolikos bar offers the ideal atmosphere for the degustation of fresh smoothies, healthy drinks, homemade “rosoli-liquors”, craft beers, Apulian wines and fresh organic beverages. In spring, there is a honesty bar available for you in the living room.

Wine Tasting
In recent years, our region stood out for its high quality wines; thanks to our vast wine list ,which includes more than a hundred different types of wine, you will be able to discover and taste some of these marvellous varieties.

Olive Oil Tasting
One of the symbols of Puglia is the Olive tree. Just a few kilometers away from our Masseria, there exists a rural park of 2000 years old monumental olive trees which has been recognized as one of the oldest in the world.

The park is located in the area of Masseria Brancati where you can visit an underground olive oil mill dating back to the Greek and Roman times. Here you will be able to taste and appreciate a great variety of organic olive oils.

Living Room
This splendid room with a XVII fireplace was used as a smokehouse for cheese and meat. Nowadays, this room has been converted into a relax/library hall where you can read books about Puglia or you can do bookcrossing and share your favorite readings with other costumers.

Gardens
Masseria Cervarolo is located in a ten hectares estate, in the heart of the Apulian countryside. The gardens are characterised by the presence of native plants. While walking along the paths you will be enthralled by the typical fragrances of the Mediterranean landscape.

The Swimming Pool
The swimming pool and the hydro-massage, located in a natural sinkhole, are surrounded by rocks and terraced gardens.

Cooking classes
During the cooking classes, Francesca e Wally will take you on a culinary journey that will allow you to discover the recipes of our tradition.

Wellness
During certain times of the year, in a cozy “Lamia”, you will have the opportunity to choose between different types of massages making your stay even more relaxing.

Tours
We will help you to discover Puglia, a millenary land of history, art, folklore, traditions and uncontaminated nature.

Natural park of dune costiere
This natural park of Dune Costiere is 15 minutes far by car from Masseria Cervarolo, it stretches over a flat and sandy coastal area characterised by wetlands located behind a dune belt. Dunes form a continuous string that is interrupted only by access ways to the sea.

Some stretches are home to the typical juniper vegetation. The dunes that are less affected by human activities have the typical sclerophyllous evergreen vegetation with a predominance of broad-leaved Phillyrea and Pistacia lentiscus. The wetlands behind the dunes consist of small brackish lagoons with halophyte vegetation.

The innermost areas, in the locality known as ‘Difesa di Malta’, are characterised by a low garrigue vegetation (to be precise the species Thymus capitatus) and large zones with very xerophilous and thermophilous sub-steppe vegetation.

Volunteer orchidaceous plants thrive in this area and wastelands with Asphodelus ramosus are found due to overgrazing.

Consequently, this area is not only a breeding site, but also and especially a staging post for rare and endangered species of the avifauna, thus playing an important role in the conservation of migratory birds crossing the Adriatic Sea.

The reserve aims, among other things, to ease the high human pressure exerted on this ecosystem. For example, the numerous paths between dunes are enlarged to enable bathers to reach the sea and more and more sand dune surfaces are used as car parks in summer.

The city, cited by authors such as Pliny, Strabo and Horace ,had a great importance in the ancient world for its geographical position, thanks to the presence of the port and the Via Traiana, in fact, it was an active center of trade and commerce.

The history of the ancient Gnathia had different stages over the centuries. The first settlement, made up of a village of huts , was built in the fifteenth century. a. C. (Bronze Age ) . In the eleventh century. a.C. ( Iron Age ) an invasion of Iapigi,a population set in the Balkans , took place.

While during the eighth century. a. C. begins the messapica phase for Egnatia, as for all the Salento ,that will end with the Roman occupation in the third century . a. C. The city will join the first republic and then it will become part of Roman Empire with which it will decline.

Of the messapica phase of Egnatia remained the mighty defensive walls ( 7 m high . , 2 km long delimit an urban area of about 40 hectares ) and the necropolis, where in addition to graves and half-chamber , there are monumental tombs room decorated with fine frescoes.

Of the city, only partially excavated , preserved vestiges dating back to the Roman period . Considerable remains of the Via Traiana, the Civil Basilica with the class of the Three Graces, the Shrine of the Eastern gods , the amphitheater, the hole.

Ostuni
Being just 7 kilometres far from the Masseria , this town is undoubtedly a place to visit. Ostuni was built on the top of a hill by the Messapi around the VII BC although there are traces of hum an settlements which can place the origins of the city in the Palaeolithic period.

It can be confirmed by the discovery of a skeleton belonging to woman later named as “Delia, the Woman of Ostuni”. The skeleton that was found in the cave of Agnano was of a woman who was pregnant at the time of death, her body was later dated to be about 25,000 years old.

During the Middle Ages the white lime was a way to prevent the spread of the plague, this is how Ostuni gained its nick name “The White City”. Famous for its very narrow streets, the town has beautiful shapes and offers breathtaking views from the ancient walls which still surround the historical centre.

The Cathedral is situated on a hilltop surrounded and protected by the houses of the old quarter, it can be reached by walking along the only road that connects the Cathedral to Piazza Libertà , a narrow and winding road but very characteristic and full of little shops and boutiques.

Cisternino
Just 5 minutes driving away from Masseria Cervarolo, this town is part of the very prestigious club of the most beautiful boroughs in Italy.

Because of its magical atmosphere, many tourists choose to visit this very ancient borough and dine in the typical narrow streets where many local butchers are situated and people can taste the exquisite “bombette”.

In just a 15 minutes walking it is simple to have a look of the beautiful churches like the church of S. Nicola or the several and beautiful buildings like “Porta Grande” and “Torre del Municipio”.

Most of all do not miss the stunning panorama of the Itrian Valley from the Belvedere Balcony perhaps taking a bite of the delicious desserts that the Vignola Bar offers. 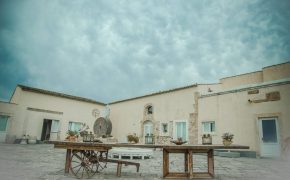 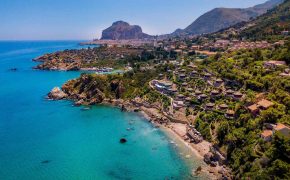 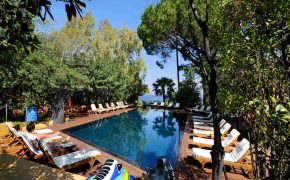