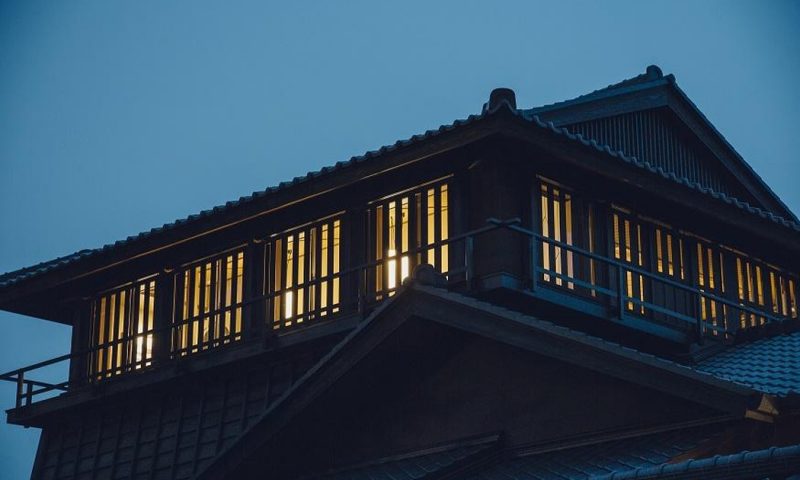 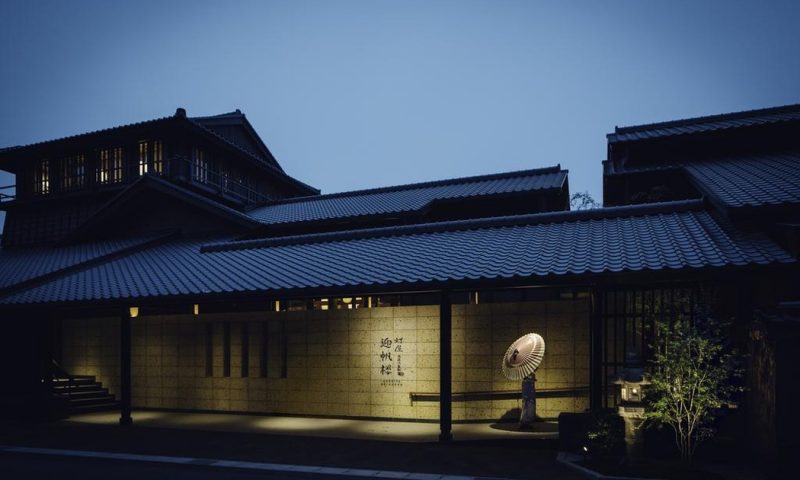 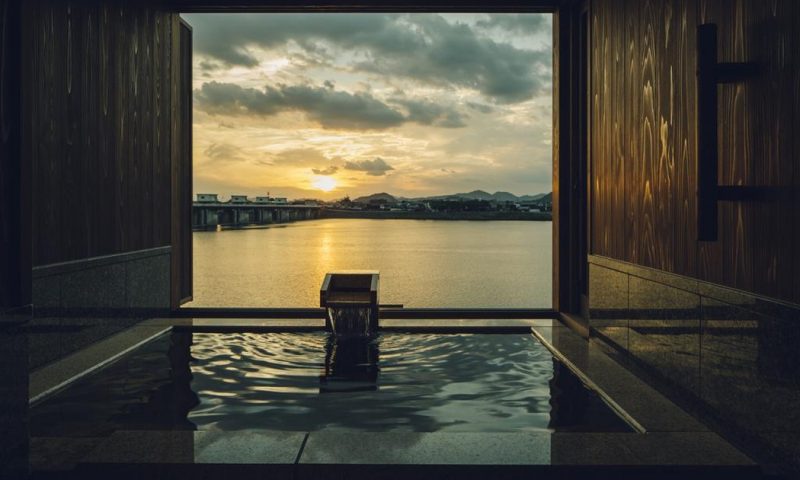 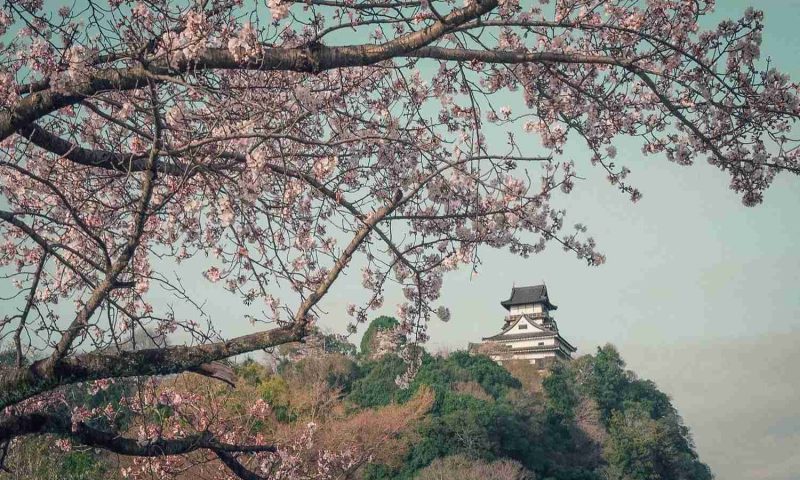 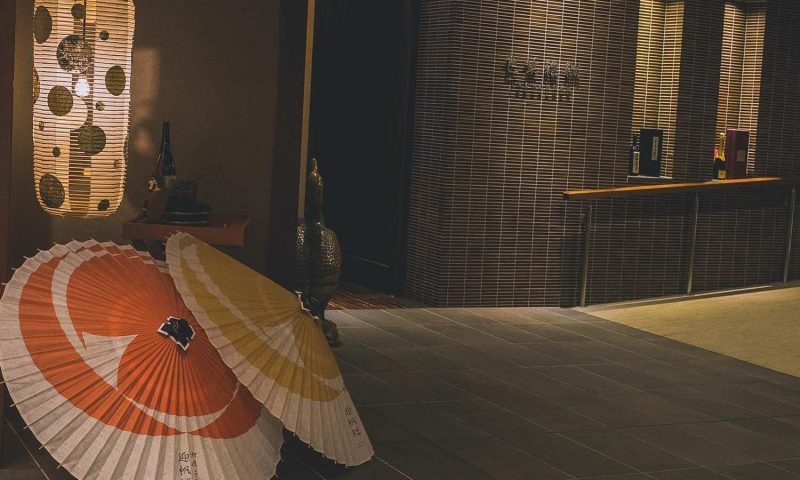 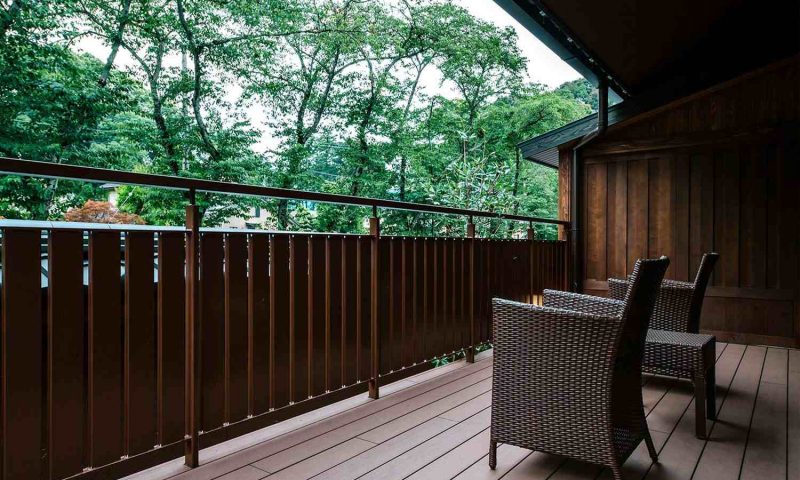 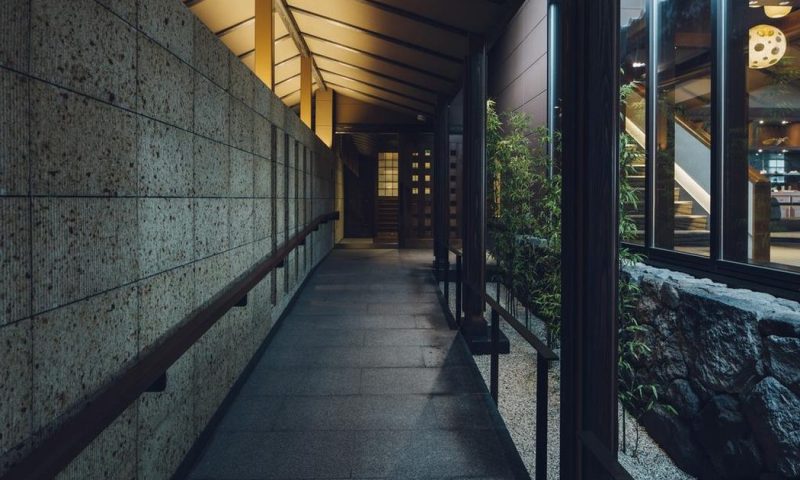 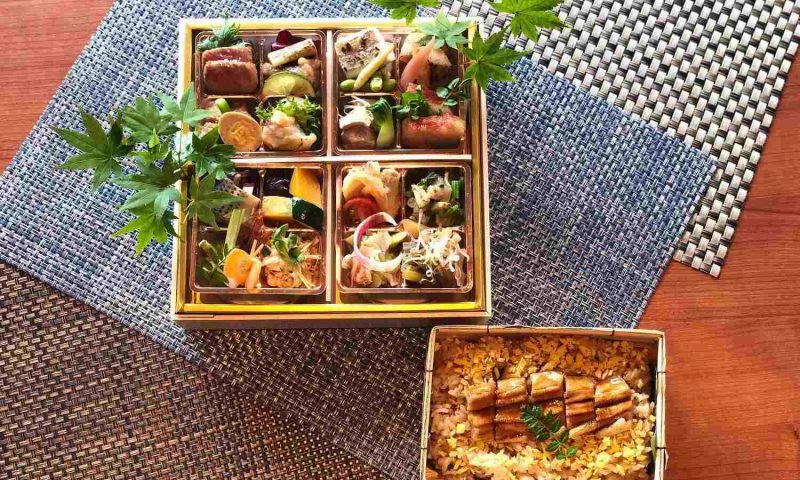 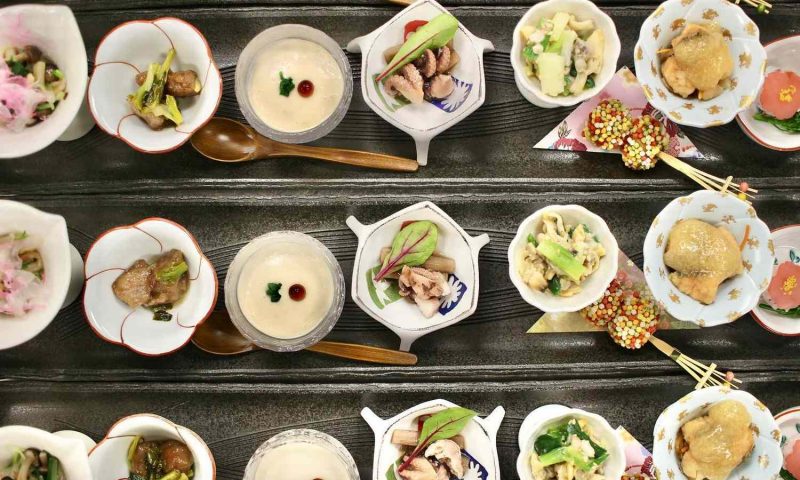 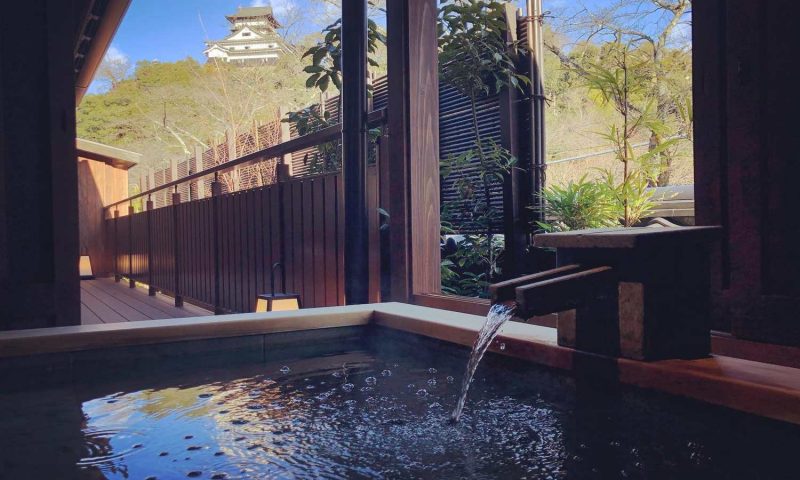 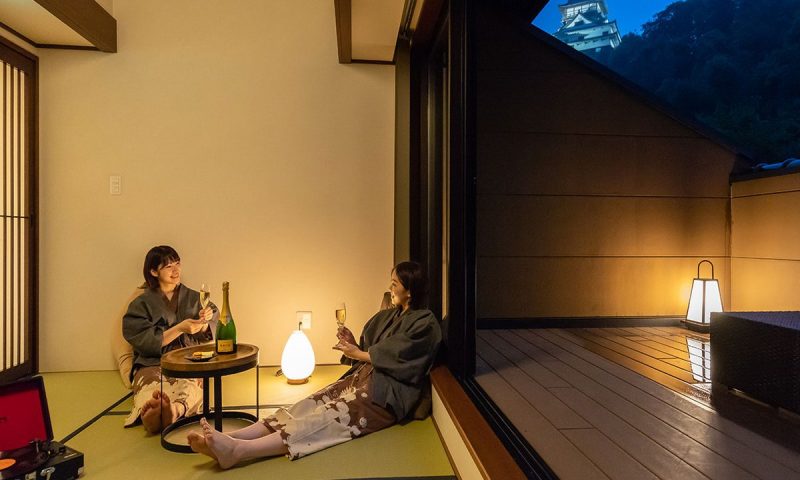 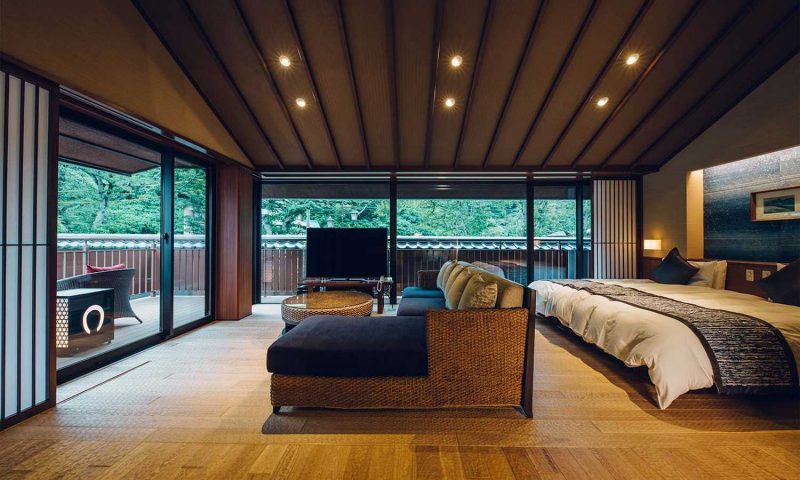 The view encompasses the leisurely flowing Kiso River and Inuyama Castle, a national treasure. This Ryokan Akariya Geihanro with a history of over 100 years in Inuyama, Aichi Prefecture, has been renewed.

Warm Japanese hospitality always awaits travelers at Akariya. Looking away from the hill-top Inuyama Castle, to the west lies the magnificent spread of the Kiso River. Enjoy a journey with a sense of history – the scenery unchanged from long ago, and the relaxing harmony of old and new at the inn.

You can see Inuyama Castle and the Kiso River from your room. Our suites with covered rotenburo offer luxurious space. All of our rooms have a covered rotenburo bath. Enjoy soaking in the spring whenever you like.

Japanese Modern Deluxe Suite
This room is on the forest side facing the greenery below Inuyama Castle. Go out on the terrace, and you can gaze on the castle. The tatami living room is a space for lounging.

River Luxury Suite
The French windows and terrace take advantage of the corner room. From the terrace, you can take in the majestic scenery of Inuyama Castle above the Kiso River as if from a boat.

Castle Luxury Suite
This special corner room is closest to the castle. Go out on the terrace, and you can see the whole of the castle and a beautiful garden.

Hot spring
Hakuteinoyu, Inuyama’s only onsen, is said to leave you beautiful, with smooth skin. Relax in your own private rotenburo, listening to the babble of the Kiso River and enjoying the view of Inuyama Castle.

Cuisine
Each dish of our kaiseki cuisine is painstakingly prepared using quality seasonal ingredients. From playful items to beautiful, delicately presented dishes, our kaiseki reveals the heights of Japanese cuisine.

Facilities
The lounge area is encompassed by a warm light. Food and art-related books, records, and DVDs are available. The free drink corner has tea and coffee, and in the evening, wine for your enjoyment.

SAMURAI HOMELAND‚ AICHI
Located in the middle of Japan, Aichi Prefecture was at the center of the Sengoku, or Warring States period. It’s where many important samurai battles took place, and where many samurai heroes, including the nations’ Three Unifiers, Oda Nobunaga, Toyotomi Hideyoshi and Tokugawa Ieyasu were born.

Aichi was dotted with over 3,600 samurai castles of various size and importance. With the construction of the mighty Nagoya Castle in 1610, Aichi, prospered, particularly as the nations’ Imperial court was in Kyoto,and the Shogun’s seat of government was in Edo (Tokyo) and right in the middle was Aichi.

Nine of the 53 checkpoints and post towns along the strategically and financially important Tokaidohighwaywere in Aichi.

This made Aichi a cultural and economic hub.It also led to Aichi’s traditional handcrafts, including Seto-yaki and Tokoname pottery and ceramics, and Arimatsu Narumi Shibori,textiles embellished with intricate patterns of tie-dyed cloth,becoming prized nationwide.

AICHI ´S SAMURAI CUISINE
Aichi is famed for its healthy food, in particular those created through the fermentation processes. One of the most famous and traditional is the healthy, long-lasting and delicious Hatcho Miso, believed to have been the secret weapon of success for the samurai of Aichi, as it is easily carried, long lasting, nutritious and tasty, making it advantageous for warriors on long campaigns.

Another fermented specialty of Aichi is vinegar.The Mizkan Corporation in Handa City has been producing balsamic, rice and wine vinegars for over 200 years. Some of Japan’s finest sake are also brewed in Aichi.

Among Aichi’s best known foods, (Nagoya Meshi) are Tebasaki, Nagoya fried chicken wings, Kishimen, which are long flat noodles served in a hot broth, Miso Katsu, pork cutlets with thick, rich miso sauce, and Hitsumabushi, being glazed, grilled eel served on a bed of rice, with various condiments arranged so it can be enjoyed in three different ways.

Admittedly, while the majority of local delicacies are a plain brown color, the taste more than makes up for the lack of visual appeal.

Ukai, Cormorant Fishing on the Kiso River
Ukai is a 1,300 year old traditional fishing technique using tethered cormorants to catch Ayu (sweet fish). A fire hanging from a steel basket at the front of the boat attracts the fish, which are scooped up by the diving birds.

The Ushou, or cormorant handler, then pulls the cormorants in and the larger fish are disgorged from the birds’ beaks.

Kiso River Ukai
The art of Ukai has been practiced on the rivers of Japan for over 1,300 years, but can only be seen in 13 places across the nation, one of the more famous being on the Kiso River, just upstream from the National Treasure, Inuyama Castle in Aichi Prefecture. Watching Ukai was a popular pastime amongst feudal lords and the rich from the 8th to the 19th Centuries.

The practice gained special support from the Emperor, and was patronized and protected by the great unifier Lord Oda Nobunaga and later, the Shogun, Tokugawa Ieyasu. Besides Nobunaga and Ieyasu, the wandering poet Matsuo Basho, and even British comedian, film star Charlie Chaplin enjoyed watching Ukai fishing.

Fishing With the Birds
Ukai is usually performed at night from long flat bottomed wooden boats. Two men control the rudder, navigating the shallower waters and collecting the fish.

The lead fisherman, or Usho, dressed in traditional garb, a water repelling straw skirt over a dark cotton kimono and pixie-like cloth cap, handles 5 to 12 cormorants tethered at the neck with straw ropes.

The Ukai fishing season operates during the warmer months from late May to mid October, except for nights of full moon and when the river rises above a certain level. Although usually performed at night, daytime exhibitions allow visitors a better view of the action.

Escape the heat of the Japanese summer and enjoy a night, or day on the river watching one of the oldest and most traditional of Japanese events, Ukai, cormorant fishing, the summer sport of the Lords of Japan.

The Treasures of Inuyama
Only 12 original castles remain in original condition across Japan. Of those 12, only five are allocated National Treasure status. The smallest, and oldest of these is Inuyama Castle, dating from around 1440, although the current structure dates from almost a century later.

Strategically positioned on a wedge shaped hill with the wide, fast flowing Kiso River running around and below it, and with unhindered views of the surrounding area, it was the first castle to be owned outright by the warlord Oda Nobunaga, although he didn’t stay long, or use it as a regular base. Instead, he left his uncle as caretaker while he went off to fight more battles.

What remains of Inuyama Castle is just the keep, the main watchtower. Turrets, barracks, large walled corridors, protective gates and related buildings once surrounded the entire mountain until their demolition at the end of the Edo Period (1603-1868).

The keep itself looks small compared to other castles. Its stone walls stand just five meters in height, and the tower itself 19 meters on top of that. Floor space is around 699 square meters, which was normal for a keep of those days.

You have to remove your shoes to enter the keep, but once inside, the wooden floor boards and naked pillars speak volumes. Oda Nobunaga, Toyotomi Hideyoshi and a host of famous historical samurai figures have trodden these floors.

Steep stairs throughout not only saved interior space, but hindered armored invaders, making defense of the castle easier. The first floor is divided into a number of chambers, with wide corridors around these chambers giving the samurai ample space to move in times of attack.

Climb a floor to see the armory where arms and armor were stored ready for attack. Above that, small balconies concealed under triangular eves provide fine views of the river, mountains, and attackers too.

The fourth floor consists of a wide chamber, surrounded by a low balcony providing spectacular views of the surrounding area.

Toyotomi Hideyoshi and 120,000 samurai used Inuyama Castle during the 1584 Battle Of Komaki Nagakute against Tokugawa Ieyasu. In 1600 it was threatened during the great battle at Sekigahara.

The castle then went through a succession of lords before Naruse Masanori was installed here in 1617. Inuyama remained in the hands of 12 generations of the Naruse clan until as recently as 2004, when it was handed over to Inuyama City and a new overseeing foundation.

Inuyama Castle is a fine example of 16th Century samurai castle architecture, a National Treasure where you’re sure to make some treasured memories of your time in Japan. 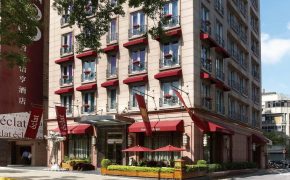 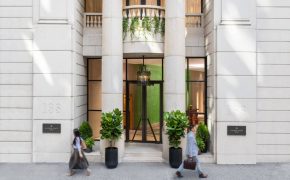 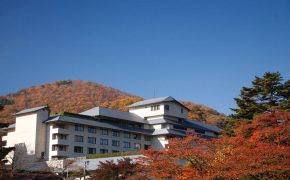