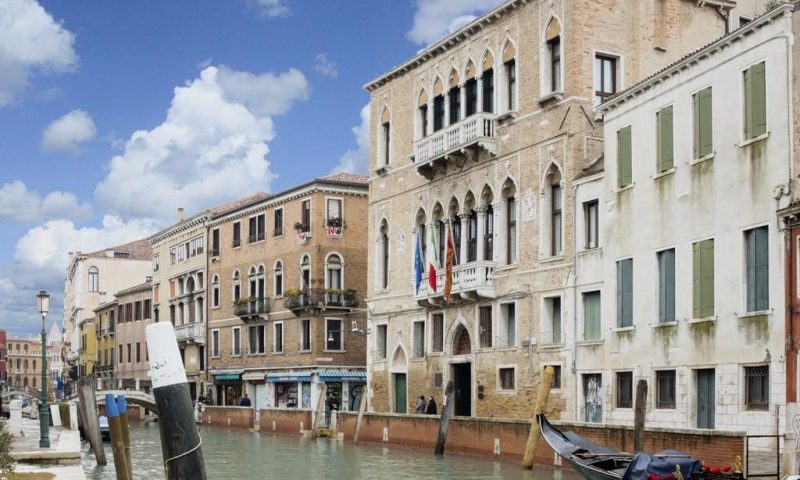 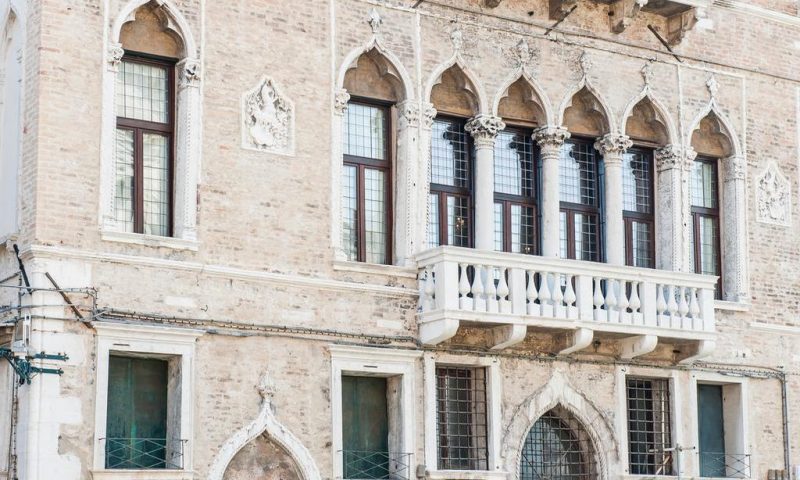 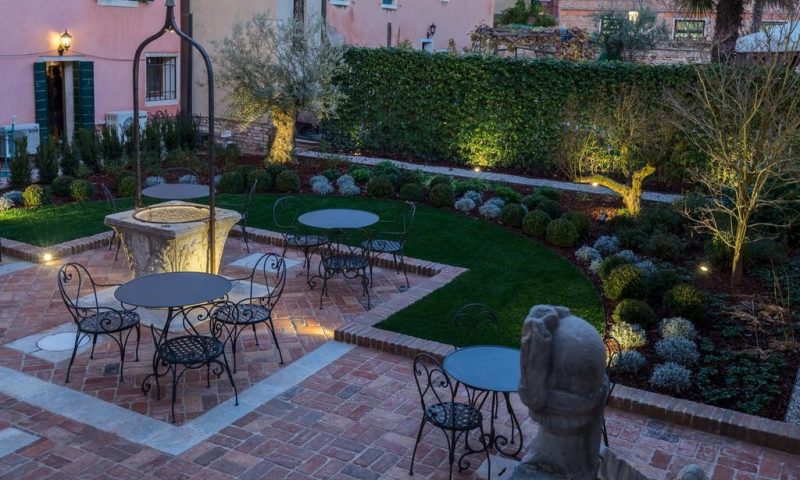 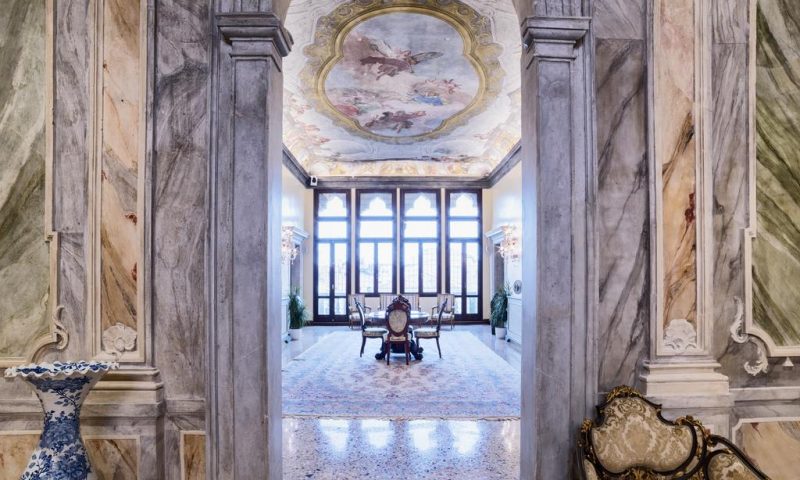 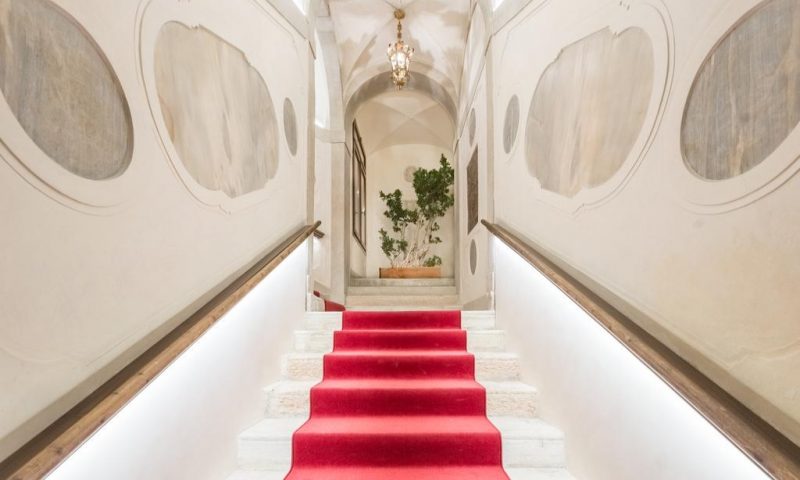 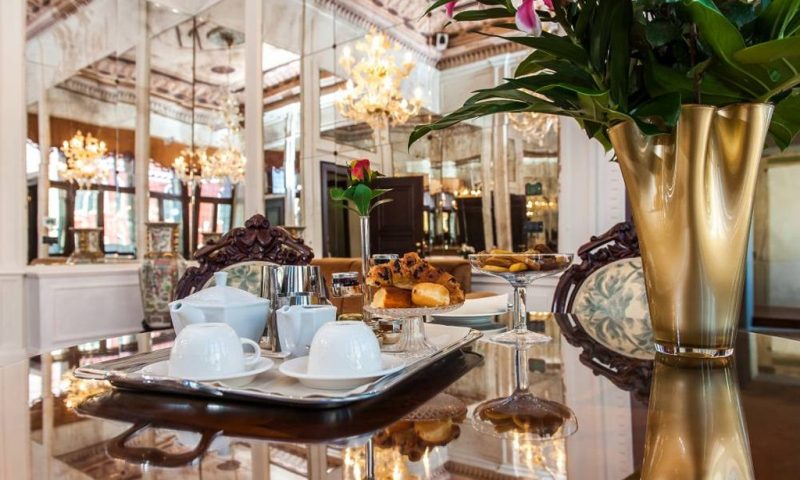 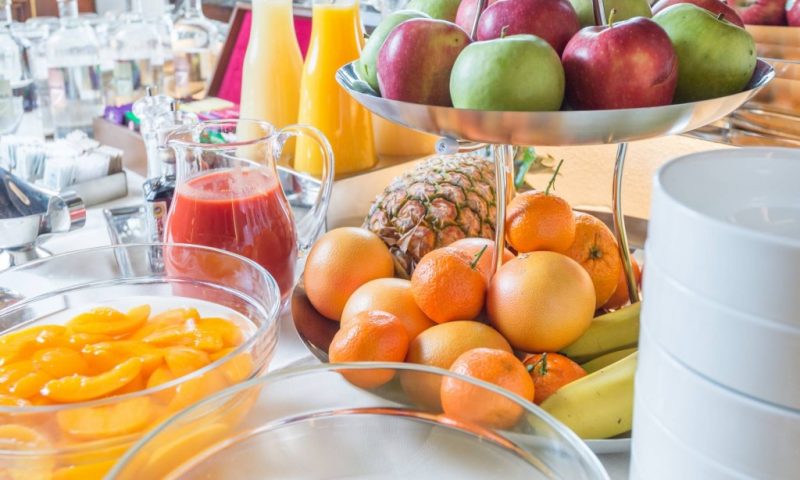 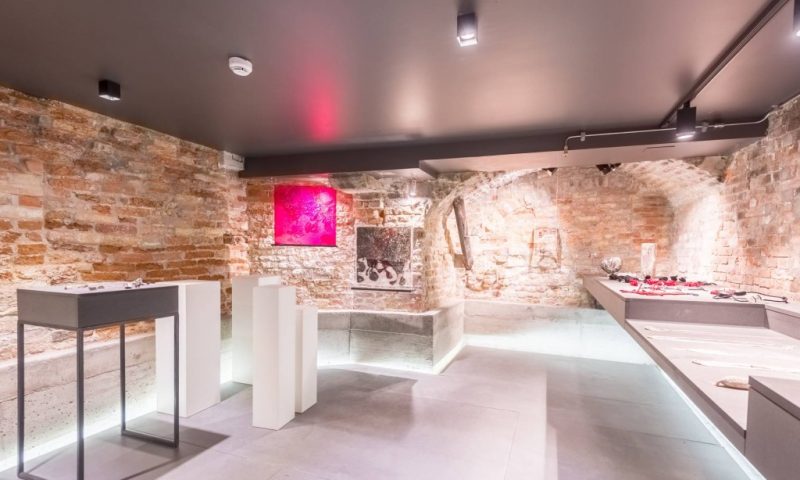 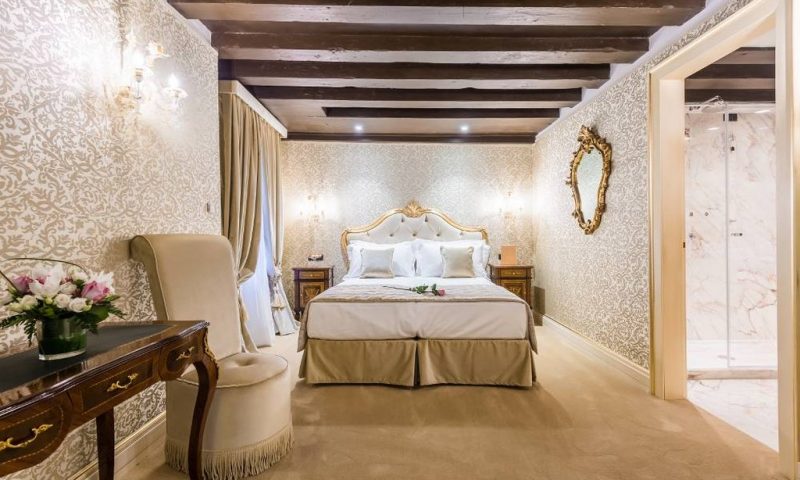 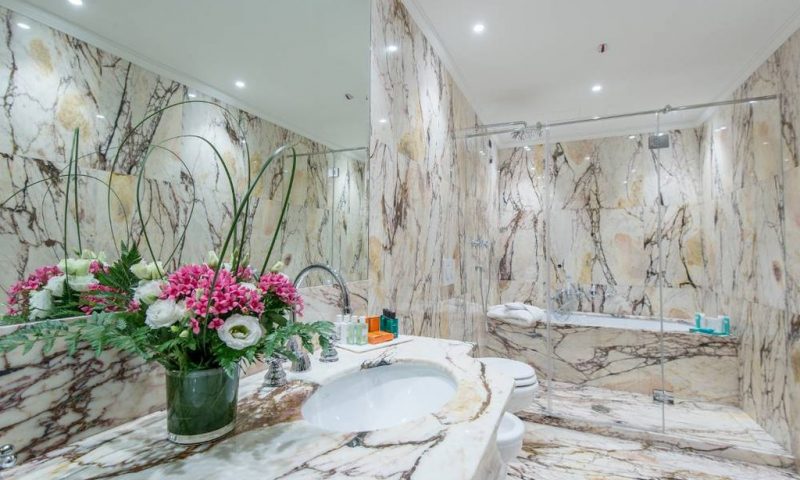 By
Giovanni Buonaiuto
on

Palazzo Nani Mocenigo, a superb example of Gothic Venetian art from the 15th Century, it is nowadays a 4 Stars Hotel located just in front of the little Canal of San Trovaso and in the middle of one of the most characteristic “Sestieri” (Districts) of Venice.

The new and restructured Palace is characterized by an important facade and frescoes from the early 1800s. In all its rooms and spaces it preserves the splendor of its noble and centenary past, where the Venetian style is exalted by its Murano Chandeliers, the original floors “Alla Veneziana” and by the precious furnishing of its “Saloni” (Salons) and Rooms.

The Palace, dates back to the XV° Century, was the residence of the Barbarigo Family whose the greatest exponent was the “Doge Agostino Barbarigo”.

The Palazzo was part of the dowry that Elena Barbarigo, Doge Agostino’s daughter, brought to her husband Giorgio Nani; then the palace passed to his son Bernardo, the founder of the family branch called ” of San Trovaso”.

In the XVIII° Century the Palace was home of the “Museum Naniano” (Museum of Antiquities, a private collection of the Nani Family), and later was the site of the Ca’ Foscari University of Venice and then of the “Glass Museum Vitraria”.

This Gothic Palace with its facade completely restored by Sansovino, contains important frescoes painted by Guarana, a Tiepolo’s collaborator, and some notable stuccoes by Alessandro Vittoria.

LOCATION
San Teodoro Palace is centrally located in Venice, near the Rialto Bridge. The apartments overlook Campo San Salvador and the wide avenue of Calle Bombaseri, and are an ideal and convenient starting point for visiting Venice.

St. Mark’s Square is less than a 10 minute walk, while just 100 meters away are the vaporetto ferry stops for the train station, Gallerie dell’Accademia, Pinault Foundation at Punta della Dogana, the Guggenheim Collection, Biennale Gardens and the Venice Lido, home of the Venice Film Festival.

A pleasant morning walk will take you from the apartments to the colorful fruit and vegetable market stalls of the Rialto, and the famous fish market, where you can shop for the local products of the waters and islands of the Venice lagoon.

It was the 74th Doge of the Republic of Venice. It was brought to the power by the new nobility in 1486, following the positive results of the war against Ferrara. In 1495 he took part in the anti-French coalition to expel Charles VIII° from Italy; a success obtained with the Battle of Fornovo.

During his task Venice tried to take some strongholds in Romagna and Puglia and the island of Cyprus was finally annexed to the Venetian Republic (1489).

During his assignment, he gave to St. Mark’s Square some of the main monuments that still characterize it: in 1494 began the construction of the Clock Tower, and in 1495 the wing of “Procuratie Vecchie”.

For his initiative the “Scale dei Giganti”, a project of the brothers Marco and Pietro Lombardo, was built in the Doges’ Palace. On 1st February 1499 the Doge inaugurated the Clock Tower. The Doge’s statue was placed next to the Lion of St. Mark, the symbol of the city on the top of the tower’s facade.

However, the statue was destroyed by French in 1797, to represent the end of the Republic. He also commissioned to Giovanni Bellini his brother Marco’s portrait for the Hall of the Major Council (1486-1487) and Pala Barbarigo (1488).

THE DOGES OF THE REPUBLIC OF VENICE
The Doge, from the Latin “Dux” ( “Guide”, “Commander”), and adapted from the Venetian “Doxe”, was the Supreme Magistrate and leader of the Republic of Venice for over a thousand years, between the VIII° and the XVIII° century.

This title was used when the city of Venice was subject to the sovereignty of the Byzantine Empire, and it became permanent after the independence of the city from Constantinople. According to the Venetian tradition, the first Doge was Paolo Lucio Anafesto, elected in 697.

Usually the person selected as Doge was one of the wise elders of the city and its residence after the earlier ones located in Heraclia (Eraclea) and Metamaucum (Malamocco) it became the Doge’s Palace, symbol of the power and wealth of the Serenissima.

The Doge had a duty to finance the state’s expenses with his personal asset, including luxurious festivities and public ceremonies such as the Carnival; for this reason the Doges were chosen almost exclusively from the wealthiest aristocracy of Venice.

Although between the VIII° and XII° century the power of the Doge was very strong, it was never possible to make the title hereditary. The Venetian aristocracy, the same one which the Doge was elected from, retained mechanisms to avoid that the power was concentrated in a single individual.

Starting from the XII° century the aristocracy succeeded to limit the Doge’s faculties through the creation of some government agencies for regulating many areas of the State organization; thereby the Doge was prevented to become an absolute prince.

The Doge could not grant hearings or open official correspondence without the presence of the “Consiglio dei Dieci” or other collegiate bodies and he was also not allowed to spend time outside the Doge’s Palace except for public events or military expeditions.

The Doge was considered a “King without Crown,” who once elected had to swear that constitutional supremacy always would have been predominant on the personal one.

The last Doge, Ludovico Manin, was deposed when Napoleon conquered northern Italy and Venice was taken by French troops in May 1797. 120 Doges were elected in the thousand years history of the Republic of Venice.

SAN TEODORO PALACE
The view from the San Teodoro Palace apartments is truly unique: in the very central location of Campo San Salvador, just a short walk from the Rialto Bridge, in the heart of Venice. You won’t easily forget…

DELUXE APARTMENT
Around 60 sqm – up to 4 guests. Spacious apartments with Murano glass chandeliers, a master bedroom, bathroom with bath or shower, fully equipped kitchen and dining/sitting room, some apartments feature a sofa bed or double or French bed (depending on availability). View onto the Calle dei Bombaseri, Calle Larga Mazzini or Merceria II Aprile street.

Living area with a fully equipped kitchen, dining/sitting area, some apartments have a French sofa bed or double bed; some feature a small balcony. View of Calle dei Bombaseri, Calle Larga Mazzini, and the Church of San Salvador.

LUXURY APARTMENT
104 sqm – up to 6 guests. Lavish apartment with Murano glass chandeliers, a master bedroom with a double bed and single sofa bed, a double sofa bed in the dining/sitting room, two bathrooms (one with a Jacuzzi and one with a shower), fully equipped kitchen. View of Campo San Salvador and the Church of San Salvador.

Starting from the hotel, a private boat tour along the Grand Canal, passing under the one and only Rialto Bridge and up to St. Mark’s Square.

Admiring the Doge’s Palace from a different perspective, with its Bridge of Sighs, having the chance to see the main “Squero” of the city, where gondolas are still produced. During the tour, a true Venetian guide will add a touch of tradition and culture to make it unique!

THE JEWELS OF VENICE

An exclusive tour to explore the landmarks of this romantic city: the Doge’s Palace and the Basilica. Skip the entrance line with your VIP access, and breathe the byzantine atmosphere of the majestic Basilica, that will impress you with its glittering mosaics.

Afterward, we will enter the fascinating Doge’s Palace, headquarters of La Serenissima Republic, that brings you directly into the power of the Venetian government. Finally your gondolier will wait for you to enjoy a romantic Gondola ride through St. Mark’s canals.

An exciting walk with a native Venetian guide, discovering the most mysterious and unknown places of Venice. A fascinating experience to the quietest but also the most traditional parts of our city. Get to know the REAL Venice!

WAKE UP IN VENICE

Start your day with a 100% Venetian experience! Discover the real heart of the city when the main activities are getting started. An immersive walk to explore the best areas of our millenary trade center.

From Rialto market to Cannaregio district, the most authentic places to wake up like a Venetian and live a peaceful breathtaking atmosphere. 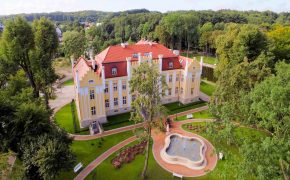 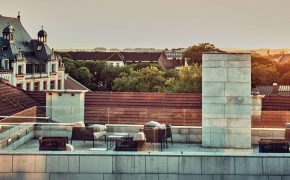 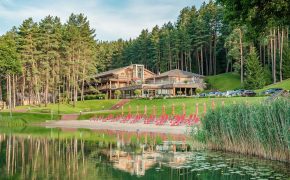