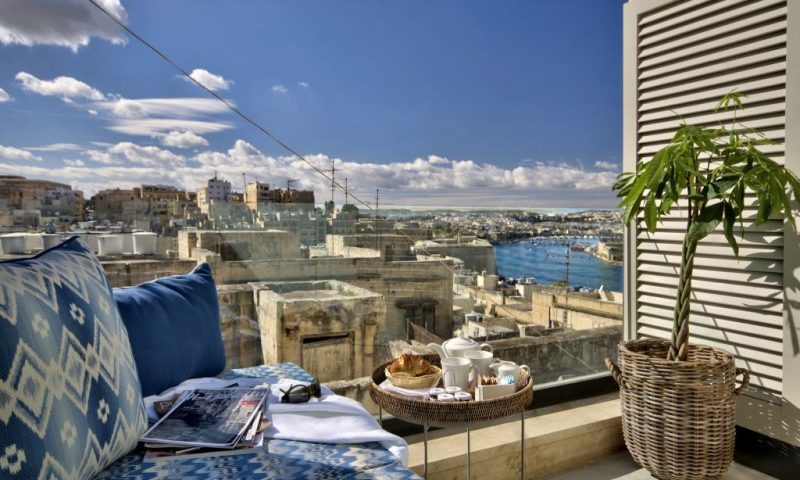 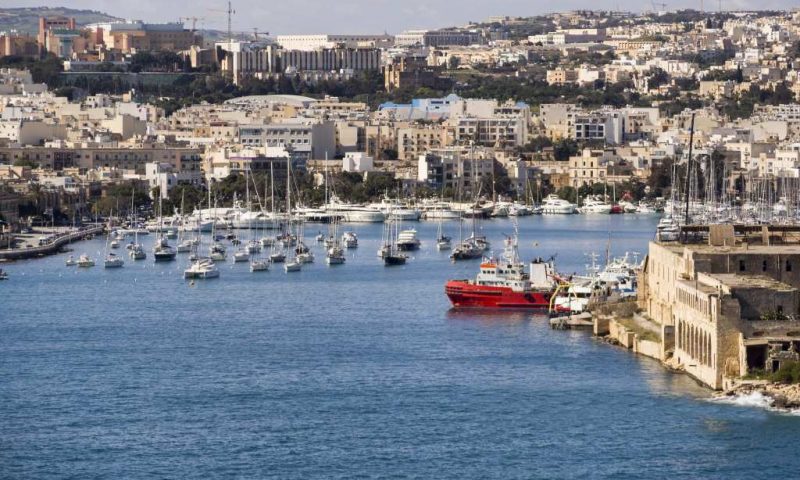 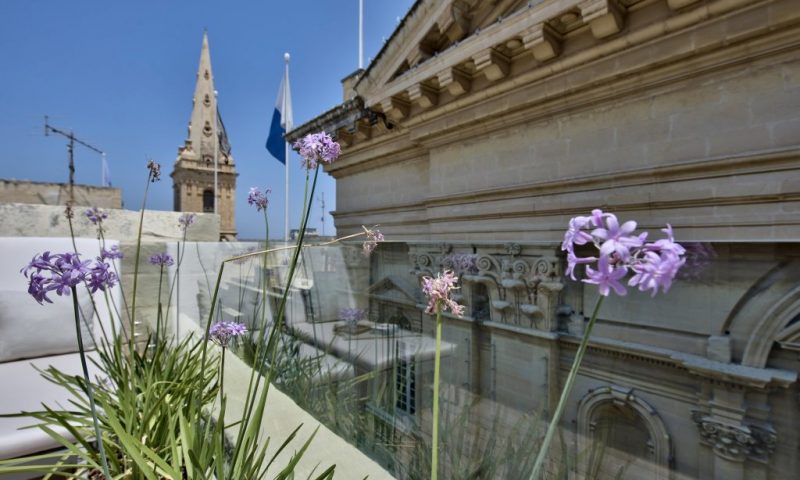 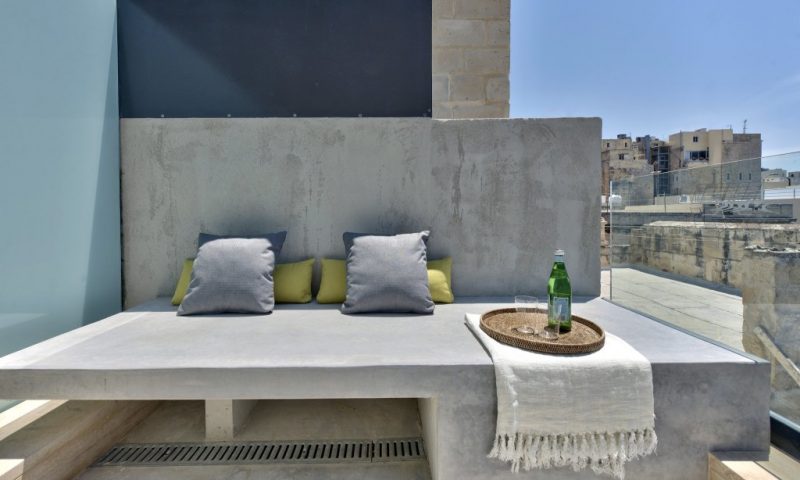 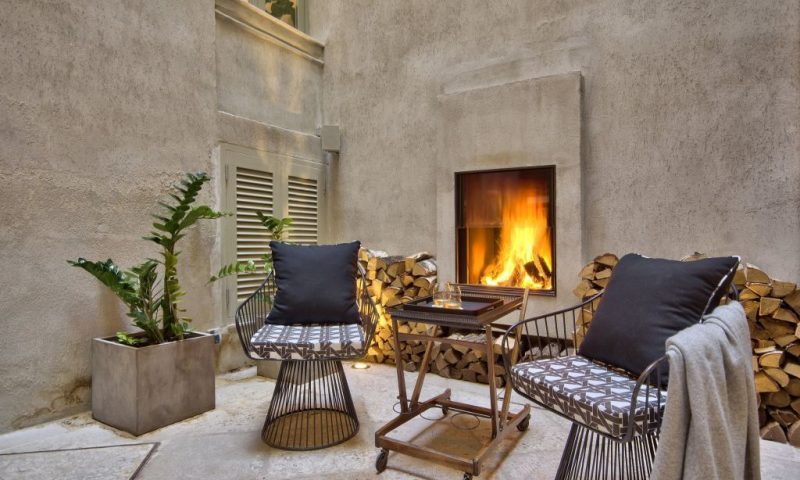 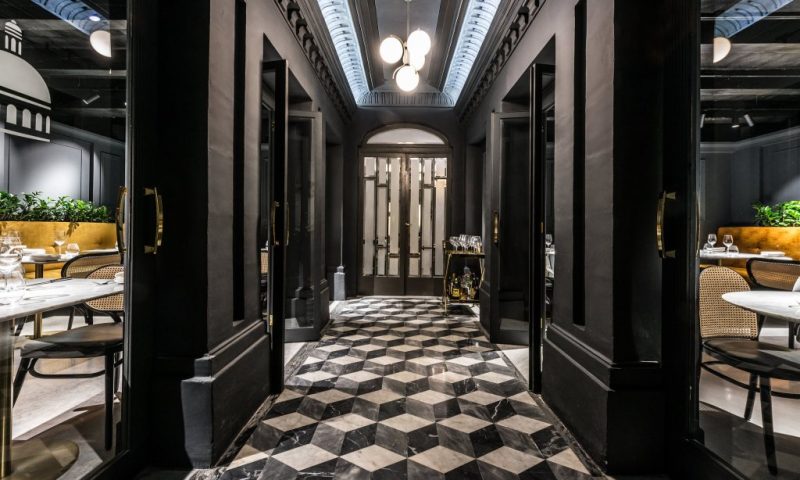 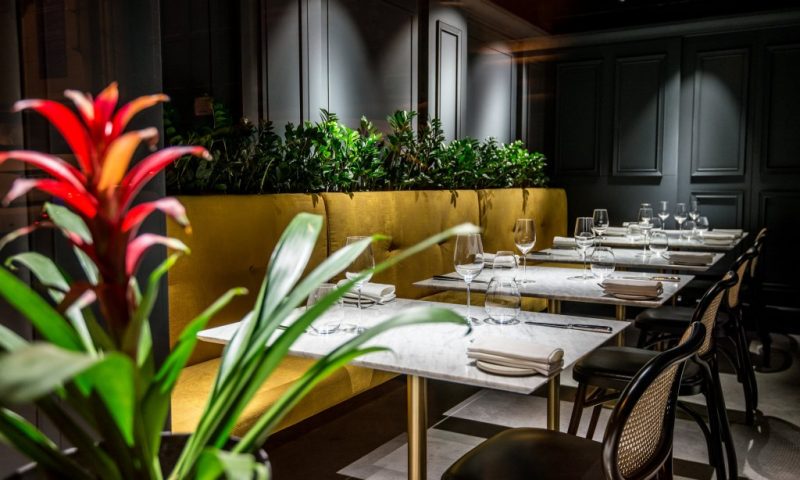 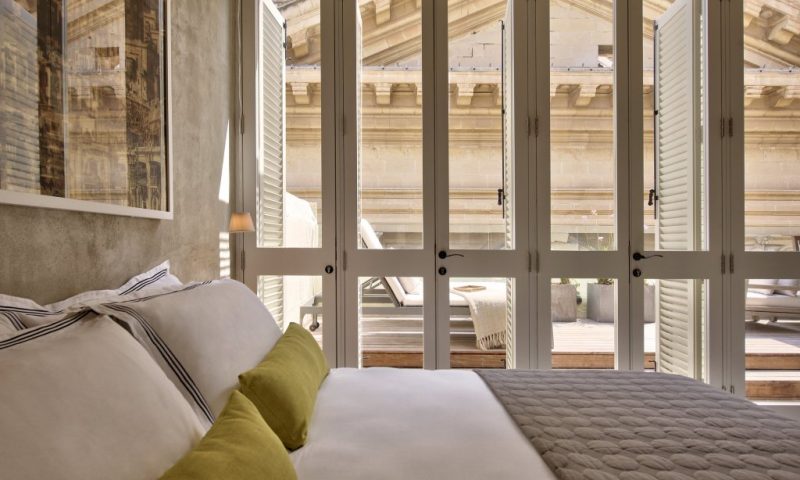 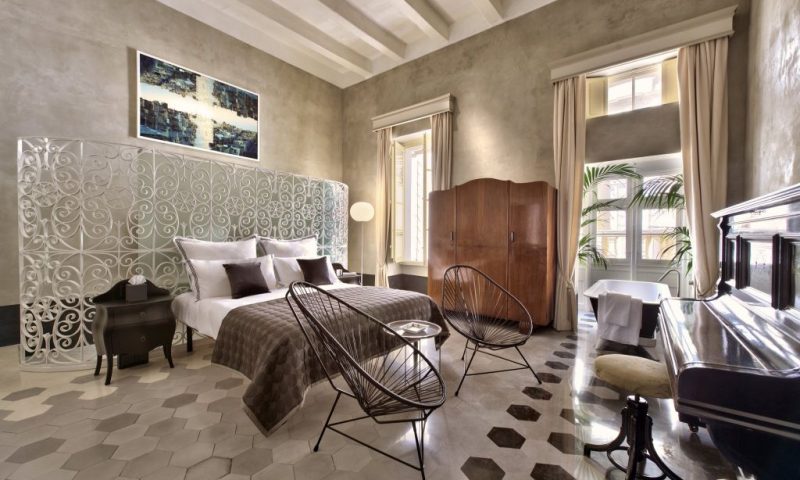 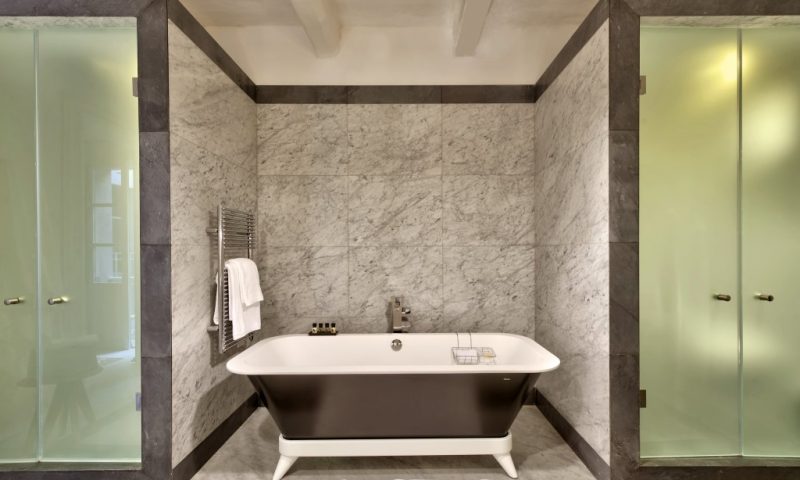 Casa Ellul, a luxury boutique hotel in Malta, dates back to the Victorian era possibly constructed during the early 19th century.

Although the precise date of Casa Ellul’s construction is not known, it was some time around 1830 when an earlier building dating to Hospitaller times was demolished to make way for this new group of houses in Valletta.

This was a time when Baroque and Rococo opulence was shifting towards a more toned down, but increasingly elegant, fashion characterised by a sense of lightness. Property investors wanted to move away from the ageing cumbersome dark mansions left from the days of chivalry.

With Old Theatre Street being narrower than six meters, looking at Casa Ellul from the street requires considerable neck-craning and it is no easy task identifying the extent of its grandeur.

In contrast, the central hotel rooms, leading onto the hotel courtyard, present a humbler, introverted experience with their timber-beam ceilings and diffused natural light.

Designed as one of a group, the (so far anonymous) architect cleverly gave the entire building a seamless façade which unknowingly can be easily read as a singular palazzo. Three tiers of regimented balconettes and Maltese galleriji overlie the street-level Valletta shops and doorways.

Ornamentation in the form of graceful wrought ironwork, delicately carved mouldings, cornices, subtle panelling, Ionic capitals, floral motifs and angelic masks alludes to an architecture intended to impress penned by the hand of a master who academically embraced Romantic Classicism.

This story begins in 1837, with a man of Italian descent, purchasing one of the most beautiful town houses, in one of the most noble cities, Valletta. The house situated at 81, Old Theatre Street, Valletta was bought by textile merchant Vincenzo Formosa from Victoria, Gozo, in 1837.

Nine years later, in 1846, Vincenzo married Ursola Galea and they had two daughters, Giovanna and Rosaria. In 1890, Giovanna, the eldest, got married to a wines and spirits merchant Fortunato Ellul.

After Giovanna died, giving birth to their only son Antonio, Fortunato married her sister Rosaria, but sadly they had no children together. Fortunato Ellul, founder of ‘Ellul Wines and Spirits’ opened his first shop in Merchant’s Street in 1878, producing spirits such as anisette and other liquors.

Fortunato was also known as “Tal-Maxxata” a nickname originating from a drink he used to make from anisette, called “Maxxata”. Eventually, he opened a second shop at 152, St. Lucy’s Street, Valletta which was run by his only son Antonio Ellul who also started importing spirits and wines.

Antonio married Alice Borg in 1918 and they had seven children. He died at the young age of 46 and his son Carmelo had to leave school to manage his father’s business.

He was later joined by his younger brothers Fortunato and Joseph, and, after their mother’s death, Joseph bought out his brothers. He introduced confectionery into the business and expanded the business by buying the shop next door, in Treasury Street.

“Ellul Wines & Spirits” is now owned and run by his sons Matthew and Andrew Ellul, who also own the original house in Old Theatre Street which was kept by the three Ellul maiden sisters Giovanna, Maria and Risette; daughters of Antonio and Alice Ellul.

Casa Ellul provides luxury boutique accommodation which gives Valletta’s magic a high end style and echoes the grandeur of times gone by, when the City was full of life.

Luxury boutique accommodation in Valletta couldn’t get any better than at Casa Ellul – a brand new, stunning, unique and intimate Luxury Boutique Hotel. Casa Ellul is a magnificent celebration of a marriage between past and future when it comes to style, architecture, design and decor.

Situated just opposite the Carmelite Church in Old Theatre Street, Casa Ellul gives Valletta’s magic a high end style while echoing the grandeur of times gone by, when the City was full of life.

Every item within this extraordinary hotel has been individually selected to promote perfection for this luxury boutique accommodation in Valletta– a little something beyond the ordinary, for those who are ready to experience new life in the City.

Casa Ellul is the Ellul brothers’ new venture; one that has brought them a long way from their established niche in Wines and Spirits, and which is undoubtedly a gem not only for them, but also for Valletta.

The palazzo that is Casa Ellul proudly boasts eight personalized suites each of which adorn a magnificent shaded courtyard and which have been uniquely designed by architect Chris Briffa using thoughtful approaches that fluently integrate space and function into a haven of personal comfort intended to provide its guests with all that they might require for their city escapade.

This is what makes this luxury boutique accommodation in Valletta not just a temporary lodging throughout its guests’ adventures, but a retreat that is stylish, luxurious, and extremely comfortable, while also being a magnificent experience for the modern traveller by providing what is most relevant to its guests without sacrificing on refinery.

Old Theatre Suite
Conveniently located on the first floor this distinct suite is the newest addition to the existing structure of the hotel. Majestic blend of both historical charm of the traditional house and modern elegance it sets a great ambience for cosmopolitan getaway atmosphere.

Named after the street hotel opens its door to, Old Theatre Suite faces the iconic Basilica of Our Lady of Mount Carmel giving a unique opportunity to benefit from the side views of the harbour from its balcony and be in the centre of vibrant city life.

Executive Suite with terrace and jacuzzi
This contemporary newly constructed suite is also set on the top most floor. The furniture in this suite is simple, but the Camilleri Paris Mode fabricated custom curtains add warmth to these otherwise austere room.

In suite 8, a corridor was formed from concrete-finished partitions which directs the guests immediately towards the terrace. This same corridor also separates the sleeping area from the bathroom facilities.

Within the bathroom itself, a hexagon-shaped timber NIC Design bath tub & glass aperture allows views of the private terrace together with the Carmelite Church façade and cupola. Timber decking was used for the floor of this terrace in particular.

The actual suite is separated from the terrace by means of a large aperture made of soft pastel coloured double-leaf glazed doors and louvered panels. When closed, the louvered doors allow shade and privacy; when opened they allow the elevated terrace to become one with the sleeping area.

Duplex Suite with view from terrace and jacuzzi
Situated on what was previously the house’s roof, the newly constructed duplex suite enjoys panoramic views from its high perched private terrace and Jacuzzi. This room is accessed from a covered external corridor which overlooks the courtyard and opens up into a common semi-public sun terrace.

Designed in a way to offer and accommodate an intimate porch for each suite. In contrast to the traditional rooms located in the original part of the home contemporary finishes and modern materials were used for this suite.

The furniture was once again kept basic and minimal. Upon entering the room a low ceiling area is dedicated to the walk in shower facilities whilst the sleeping area is situated exactly on top of the shower.

The showers are equipped with modern Gessi fixtures and a TUBES towel warmer too. Flos Romeo Babe light fittings with a fabric finish offer a softer touch to the suites when compared to the proprietary tadelalkt finish.

A skylight over a double volume space is situated exactly over the shower area. This cubicle is also visible from the staircase as one ascends to the bedroom or terrace. To the left of the bed lies a louvered door which leads out onto a terrace.

An opaque glazed partition was introduced to the terrace for guest’s privacy however whilst sitting on the deep concrete bench one enjoys the view of Valletta’s many rooftops and Marsamxett Harbour on the other side of the terrace together with the majestic Carmelite Church facade and cupola.

Valletta is a living, outdoor museum of architecture, history, art, religious iconography. The beautiful capital city of Malta, Valletta, is home to an array of impressive buildings that tell stories of a glorious and grand past, at times scarred by wars and sieges.

Valletta is a living, outdoor museum of architecture, history, art, religious iconography and so much more. Valletta is a World Heritage City and UNESCO protected site, as well as being voted European Capital of Culture 2018.

Whether you get to Valletta by road or sea, the entrance to the city is a breath-taking one with enormous bastion walls surrounding the archipelago and each side offering a different view – a striking skyline when approaching Valletta from the Sliema side, beautiful Upper and Lower Barrakka gardens if entering via the Grand Harbour, and the new Renzo Piano architectural design if entering on foot through City Gate.

It is built in a grid-like pattern with most streets crossing each other at right angles, making navigating the city fairly straightforward, although the steep hills and steps could make certain streets less appealing to explore than others.

When walking through the Valletta streets remember to look up to fully appreciate the architectural splendour that the buildings have to offer.

You will also come across various corner niches dedicated to religious deities, a multitude of churches that sit side-by-side with high street shops and signs and decals on walls that have survived over the years and which offer a glimpse into times gone by.

A peaceful calm with people visiting for more cultural and pleasurable activities Daytime in Valletta is a busy, bustling place as the main streets are lined with shops offering all the big brand names as well as local products.

It is also the mainstay of the legal industry with the Maltese Law Courts being housed in a large, impressive building in Republic Street and most legal offices choosing to be based in Valletta.

Valletta is also home to the Prime Minister’s office and Parliament building and most government entities are also housed within many of Valletta’s historic buildings. With all this activity it’s no wonder that hundreds of people head into Valletta every morning.

Night time in Valletta is a much quieter affair and in this regard it’s very different to other European capital cities.

As the office workers leave and the shops close their doors for the day, Valletta settles into a peaceful calm with people visiting for more cultural and pleasurable activities such as attending theatre or film productions at the beautiful Manoel Theatre or the wonderfully renovated St James Cavalier, or heading to one of many gastronomic delights that can be found hidden in the quieter streets of the city.

Waking and sleeping in Valletta makes you privy to be part of the city life. Valletta is an ever-evolving city that, whilst being grounded in years of history, truly attempts to keep up with the times without losing its authenticity and personality.

Casa Ellul believes that being located in Valletta offers guests and visitors an upgrade to their holiday that one cannot get from staying in just any other location. There are many places to visit all over Malta, but waking and sleeping in Valletta makes you privy to be part of the city life – something that not everyone gets to experience.

Staying at Casa Ellul means that you’re already in Valletta so that’s a plus; however, getting out of and back into Valletta is very easy since Malta’s main bus terminus is located just outside of the city.

Apart from using the bus, there are also ferries that operate between Valletta and Sliema, and Valletta and the Three Cities. Fares for all modes of transport are very reasonable. 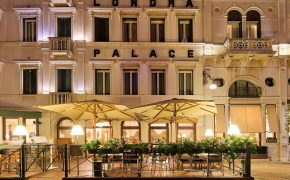 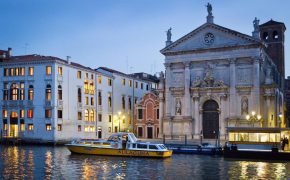 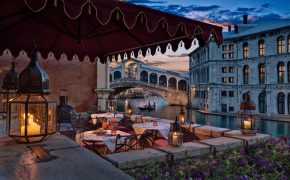